Why is Mukuba's snap count decreasing?

Why is Mukuba's snap count decreasing?

Andrew Mukuba showed just how different of a true freshman he is when he was inserted into the starting lineup for his first career game.

As an early enrollee, Clemson’s first-year safety used the spring to start getting caught up to the speed of the college game. Mukuba then debuted as a starter against Georgia back on Sept. 4 in part because veteran Nolan Turner was nursing a shoulder injury at the time, but the four-star signee remained a starter alongside Turner when the latter returned three games into the season.

“He’s one of the best signees we’ve had around here in the secondary in a long time,” Clemson coach Dabo Swinney said. “He is really, truly a dynamic player.”

Yet after starting the first six games, Mukuba has come off the bench in the last two and seen his playing time decrease significantly, even with the Tigers putting more defensive backs on the field. Clemson has started the last three games in an odd-man front with three safeties on the back end. Turner has been the mainstay with some combination of Jalyn Phillips, Tyler Venables and R.J. Mickens joining him in the starting lineup against Pitt and, most recently, Florida State.

Mukuba’s most recent start came against Syracuse on Oct. 15. He had three tackles and a pass breakup in 45 snaps, his second-fewest at the time. The following week against a pass-happy Pitt team, Mukuba only saw the field for 12 defensive snaps. He got about 25 in Clemson’s win over FSU on Saturday, Swinney said.

Mukuba is tied for fifth on the team with 30 tackles, and only cornerback Mario Goodrich matches his five pass breakups. So why has Mukuba seen his playing time decrease?

Swinney said some of it comes down to the kind of offenses Clemson has seen over the last three weeks. But a lot of it is a result of the number of viable options that have been developed at that position over the course of the season.

“We’ve got good players,” Swinney said. “Jalyn Phillips is playing really well for us right now. Mickens has really come on. So we’ve just got good depth, but Mukuba is doing great.”

Phillips and Venables, who had an interception against Syracuse, joined Turner in the starting lineup against FSU. Phillips tied for second on the team with five tackles while Turner and Venables combined for four stops against the run-heavy Seminoles, but Mukuba shuffled in and out and was Johnny on the spot for the Tigers early in the fourth quarter with Clemson clinging to a 17-13 lead.

Treshaun Ward fumbled at the end of a run near midfield, and Mukuba pounced on the loose ball for the turnover. He also had two tackles and his latest pass breakup as part of a safety rotation that looks like it’s going to continue as long as the Tigers stay healthy there.

“He’s tough and athletic,” Swinney said. “Great tackler. Great ball skills. Still learning. Schematically, there’s a lot that you’ve got to process, but I’m proud of him. The biggest thing I think is just the development of our depth on the back end and a lot of guys earning playing time.” 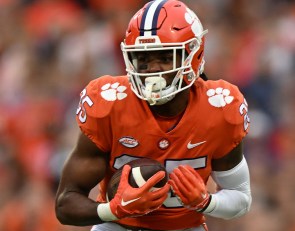 Phillips on defensive dominance in win over Miami: 'That's what we do'