It’s all starting to come together for Clemson’s defense following a thrilling 30-20 win over the Florida State Seminoles in Memorial Stadium on Saturday. For linebacker Trenton Simpson, it was a career-high day, recording 8 tackles, 2.5 for a loss, along with tacking on a sack for a second-straight game for the first time in his Clemson career.

The Tigers defense as a whole made quite the statement in the final quarter of Saturday’s matchup, solidifying Clemson’s win thanks to a 3-yard fumble recovery for a touchdown by linebacker Barrett Carter in the final seconds.

“Just to get those stops and do what Coach [Brent] Venables wanted us to do, execute the game plan, play fast and physical, was a great feeling because we worked hard all week in practice last week coming off a tough loss,” Simpson said. “Just doing what we had to do and taking care and winning was a great feeling.”

Fresh off a victory, the Tigers have a big challenge ahead when they travel to Cardinal Stadium this weekend to face yet another dual-threat quarterback in Malik Cunningham.

“It’s definitely a little bit more challenging than a standstill quarterback in the pocket, but we like the challenge, and we’ll just have to cage him in like we did the last quarterback,” the linebacker said. “That’ll just be our game plan, just limiting as much rushing yards from the quarterback as we can.”

For Simpson and the rest of Clemson’s defense, the key to success against a very versatile and mobile quarterback in Cunningham will be staying disciplined and keeping him contained in the pocket.

“When he gets out of the pocket, he’s turns into a running back kind of, so you just gotta come up, tackle him, and get him on the ground.”

The Tigers travel to Louisville Stadium on Saturday, November 6, to face yet another ACC foe in the Louisville Cardinals. Kickoff is set for 7:30 p.m. on ACCN. 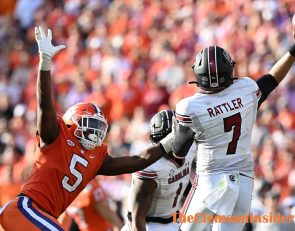