Sherrod Covil took his official visit to Clemson over the weekend with his family and once again came away impressed.  The Clemson Insider caught up with the four-star safety out of Oscar Smith (Chesapeake, Va) to get the details on his visit.

How did you enjoy the official visit?

What was the highlight of the visit?

Covil: “Really, hanging out with the players and getting to know each other better. It was real good to meet the IMG guys because I had already known Keon [Sabb] and I already knew Daylen [Everette], so I really just got to meet Jihaad [Campbell] from IMG. He’s real cool and it was cool getting to know him.”

Who was your player host and what was it like spending time with that person?

Covil: “It was Malcolm Greene. It was cool because he’s a VA guy. I’m a VA guy and I already knew him before that. I knew him beforehand because when I was in 10th grade, I played his team (Highland Springs) when he was a senior. So we had really already known each other well.”

What did you hear from the coaches during the visit?

Covil: “Nothing that they really hadn’t said before because I’d already been to a few games. That wasn’t my first time there. I went over some of the defense too, like some of the drills and plays and stuff like that. Really just assurance basically.”

What has [safeties coach] Mickey Conn said about potentially coming in and playing early?

Covil: “He said I’m gonna have to learn the [playbook]. It’s gonna be difficult, but it shouldn’t be that difficult. He spoke about me getting in there, maybe getting me and [Andrew] Mukuba in at safety.” 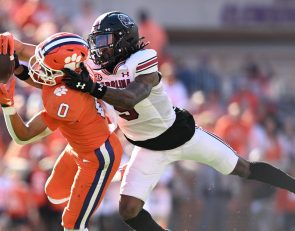