No. 10 Wake Forest came into Death Valley on Saturday looking to clinch the ACC Atlantic Division title with a win over Clemson.

The Tigers had other ideas.

Kobe Pace and Will Shipley combined for 303 of those rushing yards and totaled four rushing touchdowns on 43 total carries, averaging 7 yards per attempt between them.

Shipley even got in on the action in the passing game, throwing a 2-yard jump pass TD to Davis Allen for the Tigers, who won their 34th consecutive home game.

“It wasn’t pretty, but that’s a running back throwing a pass, so be excited about that,” ESPN analyst Joey Galloway said.

Among the other offensive highlights for Clemson was D.J. Uiagalelei’s 52-yard completion to Beaux Collins in the first quarter after Uiagalelei evaded a couple of potential sacks in the backfield to get the throw off.

“Stays on his feet, keeps his eyes down the field and throws it up and his receiver makes a play,” Acho said. “That’s what Clemson has been missing — receivers making plays for D.J. U.”

Collins, who also made a spectacular one-handed TD grab in the third quarter, recorded four receptions for 137 yards and the score.

Uiagalelei, Collins’ former high school teammate at St. John Bosco in California, finished 11-of-19 passing for 208 yards and one touchdown with one interception.

Meanwhile, Clemson’s defense held Wake Forest’s offense — which entered the game averaging 44.7 points per contest — to a season-low 27 points while racking up seven sacks and 10 tackles for loss.

“We knew the Wake Forest defense, not very good,” Galloway said. “They had to score a lot of points, which they didn’t do in this game.”

Clemson hopes to carry the momentum from Saturday’s victory into this week’s road matchup against rival South Carolina (6-5, 3-5 SEC).

“All of a sudden, you wake up and Clemson has won four in a row,” Acho said. 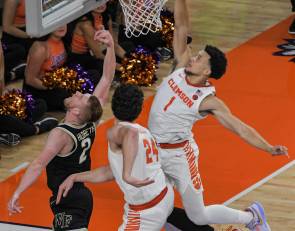