After helping Calvary Day School (Savannah, Ga.) improve its undefeated record to 12-0 with a win over Wesleyan (Norcross, Ga.) in the second round of the Class A Private state football playoffs this past Friday night, four-star linebacker Troy Ford Jr. traveled to Clemson with a couple of teammates for Saturday’s game against Wake Forest.

The 6-foot-2, 235-pound junior in the 2023 class made the trip to Tiger Town with 2023 defensive lineman Terry Simmons and 2024 quarterback Jake Merklinger.

It marked the second unofficial visit to Clemson this season for Ford, who was also in Death Valley for the Tigers’ win over South Carolina State on Sept. 11.

“It was amazing as always,” Ford said of the latest visit on Saturday. “I really felt close with the coaches. We bonded. Also my teammates, they had a really good time, too.”

Ford spent plenty of time during the visit with Clemson assistant coach Todd Bates, and after the Tigers’ 48-27 victory over the Demon Deacons, Ford was able to speak with defensive coordinator Brent Venables and head man Dabo Swinney. 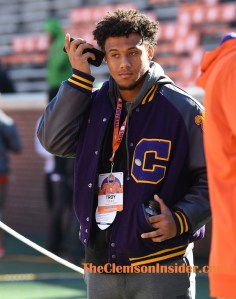 “It means everything because I’ve been working very hard to get an offer from there,” he said. “So, just knowing that they’re interested in me makes me want to work harder.”

In addition to Clemson, Ford has been to games at South Carolina, Georgia, Auburn, Notre Dame and UCF this season. He is slated to return to Columbia for the Gamecocks’ rivalry showdown against the Tigers this Saturday.

Right now, Ford is more focused on finishing his junior season strong rather than the recruiting process. But he has a timeline in mind for when he wants to begin cutting down his recruitment.

Where does Clemson stand with Ford at this point in the process following his latest visit to campus last weekend?

“They’re very high on my board,” he said. “That’s a very special place, and I really love the environment there. So, I’m working very hard to get an offer from there.”

Ford, who has played both outside linebacker and defensive end for Calvary Day this season, is credited with 44 total tackles, 12 for loss and four sacks in 12 games this season.

Most schools, including Clemson, are recruiting him as a linebacker.