Clemson picked up a verbal commitment Tuesday from a top in-state prospect in the class of 2025.

Parker could end up being a pitcher and a shortstop in college. Time will tell, but he is really strong on the mound.

You can check out some clips of Parker below:

I would like to thank God, my family, and @ClemsonBaseball for giving me the opportunity to continue my Academic and Baseball career at @ClemsonUniv #AllIn #GoTigers CU in ‘25 #Committed pic.twitter.com/EgLOM3HTWA

One of the top players in the 2025 class in the state and country @danielp2_25 up to 89 @PBR_SC @Post1Baseball @HartsvilleB pic.twitter.com/XWuIEmpJEB 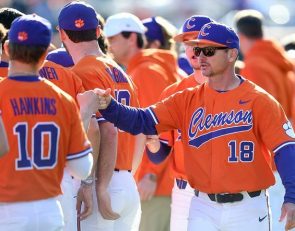