Tony Elliott is still in the running for his first head coaching. Meanwhile, Clemson coach Dabo Swinney has some decisions to make regarding his defensive staff for the bowl game following Brent Venables’ departure for Oklahoma.

After reaching out to multiple sources, The Clemson Insider has gathered some information on where things stand with those situations as of 12:20 p.m. today. We’re passing it along here.

Elliott’s name has been heavily linked to the head coaching vacancies at two other ACC schools, Virginia and Duke. As TCI previously reported, Duke remains the much more likely destination should Clemson’s offensive coordinator land one of those two jobs after Elliott formally interviewed with Duke officials on Sunday.

While we know Elliott is among the Blue Devils’ top candidates, another one has reportedly emerged recently. Dallas Cowboys defensive assistant George Edwards, a Duke alum, is someone else that’s being targeted by Duke officials, according to CBS Sports and other reports. Meanwhile, Elliott was on the road recruiting for Clemson on Monday and is believed to be doing the same today, though TCI isn’t able to confirm that at this time.

So while the waiting game for Elliott continues, Clemson already knows its defensive coordinator is gone, leaving Swinney with at least one major void to fill on his coaching staff. In the meantime, who will fill that role in the interim for Clemson’s Cheez-It Bowl matchup with Iowa State later this month?

It could be one of the Tigers’ other on-field assistants, but another name we’ve heard from sources is Wesley Goodwin, a senior defensive analyst who’s served as an interim position coach for the Tigers before. According to one source, Goodwin is being heavily considered for an on-field coaching role for the bowl game if the move hasn’t been made already. A source within the athletic department told TCI no decision on an interim defensive coordinator has been officially made as of late this morning.

Stay tuned to TCI for more on these developing situations. 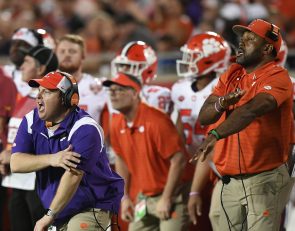