Clemson legend and current Tigers running backs coach C.J. Spiller was honored in Las Vegas on Tuesday night for his induction into the College Football Hall of Fame.

In an interview with the National Football Foundation, Spiller was asked about being a coach now and what it’s like to be on a coaching staff, trying to teach his players what he was taught when he was a player.

“It’s different,” Spiller said. “But it’s a tremendous honor that I take great pride into because you’re having an opportunity to have an impact on a young man’s life and kind of shape him into the young man that he can go off and be successful – not only in the game of football, but give him the tools that he’ll need for life itself. So, that’s the thing that I really enjoy.” 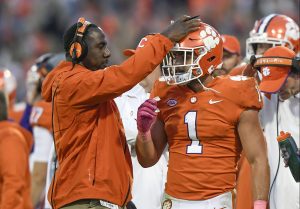 Clemson running back Will Shipley (1) is congratulated by running backs coach CJ Spiller after scoring on a 21 yard carry against Florida State during the 4th quarter Saturday, October 30, 2021 at Clemson’s Memorial Stadium. Bart Boatwright/The Clemson Insider

Spiller — one of the most decorated and beloved players in Clemson history from his four-year career as a running back for the Tigers from 2006-09, who went on to have an eight-year NFL career (2010-17) after being the ninth overall selection in the 2010 NFL Draft by the Buffalo Bills — shared a nice story about a text he received from Clemson freshman running back Will Shipley to congratulate him on his College Football Hall of Fame induction.

“I was actually texting Will Shipley last night, and he was texting and congratulating me,” Spiller said. “You never really know how your players really perceive you until they tell you. So, for him to send that text last night, it meant a lot to me.”

Spiller became Clemson’s eighth inductee in the College Football Hall of Fame, joining four coaches (John Heisman, Jess Neely, Frank Howard and Danny Ford) and three players (Banks McFadden, Terry Kinard and Jeff Davis). At the time of his selection, Spiller became one of only 1,038 players and 223 coaches have been immortalized in the Hall, putting him in the top 0.02 percent of those who have played or coached the sport.

Spiller’s historic college career culminated with a senior season in 2009 in which he finished sixth in Heisman Trophy voting after winning ACC Player of the Year and being selected as a unanimous first-team All-American. He became the first player in the history of the Walter Camp All-America team to be first or second-team All-American at two positions in the same year.