After official visit, future Tiger ‘pumped up for the new Clemson Football’

After official visit, future Tiger ‘pumped up for the new Clemson Football’

Among the Clemson commitments in the 2022 class who were on campus for their official visits this past weekend was Griffin Batt from nearby Daniel High School.

Batt, who pledged to the Tigers in July, will join the program next summer as a preferred walk-on tight end and long snapper.

“It was so much fun, just getting back on campus again and seeing all the coaches and a lot of my future teammates,” Batt told The Clemson Insider. “Really, really fun.”

The future Tiger was accompanied on the official visit by his parents and two brothers.

“They love it up there,” Batt said of his family. “It’s so much fun. All the coaches bring out all their kids, so my younger little brother – he’s 11 – he was just going wild. Those are all his buddies, too, so it was like a playdate for him.” 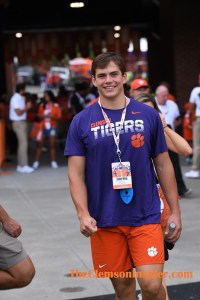 The highlight of Batt’s time on campus over the weekend came when he played laser tag at the football facility with his fellow official visitors and some of his future coaches.

“It was actually so much fun,” Batt said. “When I read it on the schedule, I was like oh, this’ll be fun. But it was so much fun. It was just a few of the coaches and then all the guys, and we were just going wild all over the facility. It was awesome.”

Over the course of the weekend, Batt spent time with a bunch of Clemson staff members, including Brandon Streeter, Jordan Sorrells, Wes Goodwin, Thomas Austin, Andrew Zow and of course, Dabo Swinney.

Based on what he heard from the coaches, Batt’s overarching takeaway is that Swinney’s program will be just fine moving forward despite the coaching changes that have taken place of late, most notably Brent Venables leaving to become the next head coach at Oklahoma and Tony Elliott departing to take over as Virginia’s new head coach.

“I’m super excited for Coach V and Coach E, and I would’ve loved to have been coached by Coach Elliott and Coach Venables,” Batt said. “But I’m really excited for the guys stepping up. And I was talking with a bunch of guys this weekend – we are pumped up for the new Clemson Football, which is kind of what this feels like, at least for us.”

Batt can’t wait to get on campus for good next summer and start his career at Clemson.

What will Batt bring to the table for the Tigers when he joins the team?

“You can definitely expect someone who just gives a lot of effort, plays with some passion and fire,” he said. “I think I’m a great teammate, really just a grinder, and I’m really excited just to get in, get to work and go win some championships, graduate and have a great four to five years while doing it.”