The redshirt sophomore quarterback entered the portal on Dec. 3.

“This day and age, with that transfer portal, it’s not a surprise, first off,” Streeter said.

“I’ll say this about Taisun — what an unbelievable young man he is. Comes from a great family. He just felt like he needed another opportunity and another restart somewhere else. So, I’m excited for him to have another opportunity. (He has) my full support, and he did some good things, there’s no doubt about it. He’s got some talent.”

Phommachanh played in six games this season, completing 11-of-19 passes for 131 yards and one touchdown with one interception, while rushing for 69 yards and another score on 11 carries.

A former four-star prospect, the Bridgeport, Conn., native entered 2021 having completed 11-of-29 passes for 73 yards and having rushed for 81 yards on 19 carries in 86 snaps over seven games.

“I really do,” he added. “You have a guy named Hunter Helms and you have a guy named Billy Wiles who have put the work in, number one. They understand the offense, they understand the big picture and they continue to improve, they continue to want to get better and better each and every day. So, that’s the biggest thing is knowing that you have guys behind D.J. that can manage it and understand the big picture, and that’s what they’ve been able to do. So, just really excited about those two young guys.”

Clemson head coach Dabo Swinney said recently that Helms and Wiles, each originally preferred walk-ons, would both be placed on scholarship.

Austin (Texas) Westlake five-star Cade Klubnik will join the Tigers’ quarterback room in January when he enrolls at Clemson after signing on Dec. 15. Meanwhile, quarterback/wide receiver Will Taylor is recovering from a season-ending ACL injury suffered in the first half of Clemson’s win over Boston College on Oct. 2. 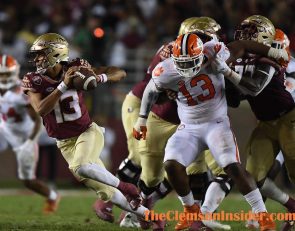