Tigers, Cyclones locked in a tight one at the half

Tigers, Cyclones locked in a tight one at the half

ORLANDO — Clemson heads into the break hanging onto a 6-3 lead over Iowa State at the Cheez-It Bowl at Camping World Stadium.

Clemson totaled 104 yards of total offense in the game’s first 15 minutes. But Brandon Streeter’s unit was unable to get much of anything going after a relatively successful first drive.

From there, the offense experienced some of the similar struggles that plagued the unit throughout the course of the regular season — execution —proving to be transcendent even through a changing of the guard at offensive coordinator.

D.J. Uiagalelei was methodical and played relatively well. His pocket presence is still somewhat lacking, but he didn’t get the help he needed from some of his teammates.

Uiagalelei went 15-of-24 with 145 yards passing in the first half of play. He completed 63% of his passes, though, it would’ve been more if not for the combined drops of Will Shipley, Joseph Ngata and Beaux Collins.

Wes Goodwin’s first half as Clemson’s co-defensive coordinator couldn’t have fared much better. Sure, the Tigers did allow Iowa State to drive the football down the field methodically on two separate offensive possessions, but both drives ended in field goal attempts.

The defense’s bend, but don’t break mentality proved to be a relative theme in the first half of Wednesday’s contest.

The Tigers would catch a huge break on a would-be touchdown, late in the first quarter. Iowa State quarterback Brock Purdy had an open target in his veteran tight end, Brandon Allen, in between two Clemson defenders. The senior quarterback sailed the throw wide of Allen, forcing the Cyclones to settle for 3-points.

They would settle for two field goals, but Iowa State kicker Andrew Mevis went 1-of-2 on those attempts, missing from 43-yards out.

As for Clemson, B.T. Potter made 2-of-3 of his field goals, making one from 51-yards out and missing a 36-yarder as time expired.

Clemson had to reach further into its depth chart after James Skalski limped off injured midway through the second quarter. Skalski did not return to the game in the first half and was on the sideline without his helmet.

LaVonta Bentley started in place of Spector, while Jalyn Phillips started for Turner.

The absences of Skalski and Spector paved way for an interesting linebacker configuration as the Tigers had Barrett Carter at the SAM-backer position with Keith Maguire as the MIKE and Jeremiah Trotter, Jr. as the WILL-backer.

The Cyclones did have absences of their own, including leading-rusher Breece Hall, who opted out of Wednesday’s game.

Purdy completed 9-of-15 passes with 112 yards passing, while Iowa State ran for just 41 yards on 11 carries.

The Cyclones will receive the second-half opening kickoff. 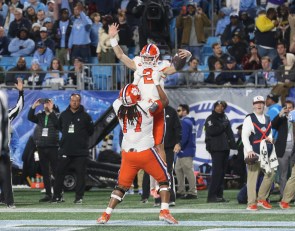 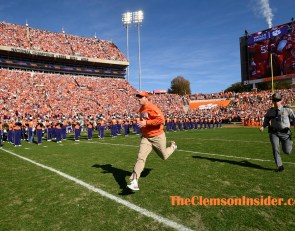