Yes, Clemson’s offensive line coach was more than deserving, considering a tumultuous season that saw him and his unit as constant culprits of criticism, but in a way, it was also a send-off.

Caldwell will be transitioning into an off-field role with the program as a director of high school relations. While Swinney said offensive analyst Thomas Austin will be taking over as the offensive line coach moving forward

This news shouldn’t come as a surprise to many. While Swinney didn’t announce the move until a couple of hours after Clemson’s season concluded, it was the expected move for quite some time now.

It’s also likely that prospective recruits were aware of Clemson’s plans, while Caldwell served as many of their lead recruiters. The Clemson Insider spoke with one of those recruits Thursday, who spoke glowingly of Caldwell.

Even though Caldwell and Elliott served as Oceanside Collegiate Academy (Mt. Plesasnat) 2023 four-star offensive tackle Monroe Freeling’s lead recruiters, it doesn’t appear that the absence of those two figures will affect his recruitment.

“I have really enjoyed getting to know Coach Caldwell,” Freeling told TCI. “He is as genuine as it gets and tells great stories. His best story was how he tried to recruit my current OL coach (Antoine Rivens) ‘back in the day.’ It’s great that he ended his career as a coach with a W.

“His legacy will live on through Coach Austin, who I am excited to see begin his coaching career at Clemson!” 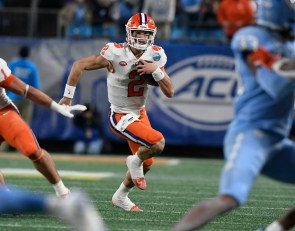