“He’s a real cool guy,” Knox said to The Clemson Insider. “I feel like he’s real laid-back. He’s not too stressed about everything, and he’s just cool. He’s honest, and I feel like he’s going to do a great job as O-line coach. I think he fits the role well and he’ll be a good replacement for Coach Caldwell. So, I think it’s going to work out really well for Clemson.”

Knox keeps in periodic contact with Austin and has been on Austin’s radar for quite some time. They spoke again recently after Austin was promoted from offensive analyst to O-line coach, with Caldwell transitioning into an off-field role with the program as a director of high school relations. 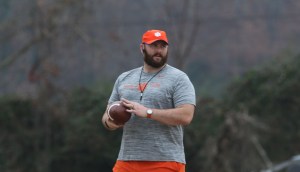 A 6-foot-4, 300-pound junior, Knox holds offers from South Florida, Charlotte and Eastern Michigan, while he has garnered interest from schools such as Wake Forest, Virginia Tech, South Carolina, Vanderbilt, Cincinnati, Coastal Carolina and Appalachian State, along with Clemson.

When Knox was at Clemson as an unofficial visitor for the Wake Forest game in November, Austin expressed the Tigers’ intent to take a closer look at him this spring.

“They really like me,” Knox said. “They want to re-evaluate me in the spring. That’s pretty much what he said when I was at the Wake Forest game.”

“Our relationship is pretty good,” he added of Austin. “We both know each other pretty well. So, hopefully things will pick up real good soon here.”

Knox has camped at Clemson since he was in the seventh grade and plans to participate in the Dabo Swinney Camp again this summer.

“It’s real fun,” he said of Swinney’s football camps. “As a kid, you go and look forward to Swinney Ball and stuff like that. But as you get older, you actually start getting interested to learn stuff and get better as you go there. So, that’s really one thing that you can do when you get there – you get better, get to compete a little bit more in one-on-ones.”

Knox doesn’t currently have a timeline for his commitment decision, as he waits to see what other college offers come his way.

Clemson is undoubtedly the “dream offer” for Knox.

“It would mean a lot,” he said. “To get that offer has been a dream of mine for a long time. I feel like I’ve been working real hard to get offers from schools such as Clemson. So, it really would mean a lot to me.”