Packer reflects on Clemson's beatdown of Bama, how media was stunned

Packer reflects on Clemson's beatdown of Bama, how media was stunned

Today, Jan. 7, marks the three-year anniversary of one of the most memorable nights in Clemson football history – Jan. 7, 2019, when the Tigers defeated Alabama, 44-16, to win their second national championship in three seasons.

On the Packer and Durham show on ACC Network this morning, Mark Packer reflected on that night three years ago when Dabo Swinney’s team dominated Nick Saban’s squad at Levi’s Stadium in Santa Clara, Calif., and Packer brought up what he heard from some Alabama media members in the buildup to the game.

“There were more than just stunned Bama players. There were stunned media members, too, I might add, from that game,” Packer said. “Hard to believe that was three years ago today. Because being out there, I mean, I got to tell you – the lead into that, all I heard was ‘the greatest Alabama team of all time. Poor Clemson, this freshman quarterback’s never seen anything like it. Don’t they know this is Alabama football. We saw what happened at the Sugar Bowl. Why is this game going to be close. Alabama’s destroyed the Southeastern Conference. It’s the greatest league since sliced bread. Clemson doesn’t play anybody, yada, yada, yada, yada, yada.’

“And Clemson beat the living daylights out of them that night. I mean, that was an absolute woodshed job to the point where Dabo’s taking a knee to make sure they didn’t put half a hundred on Nick Saban. That was an absolute time-to-go-to-bed, night-night, sleep-tight game. It was unbelievable.”

Clemson’s 28-point win against Alabama that night marked the worst loss of Saban’s Alabama tenure, while the 28-point victory over the Tide is tied for the largest margin of victory in a College Football Playoff title game (Alabama defeated Ohio State, 52-24, in 2021).

“I’m not going to tell you who said it. But I was told before the game from some members that I respect immensely, before the game, from Clemson, that they thought they were going to beat the you-know-what out of Alabama,” Packer recalled. “They had kind of a mindset that they thought they were the better team. Now, I know you’re going to say, ‘Oh, every coach thinks that before they go into the game.’ Yeah, there’s one thing that you hear lip service. But the way it was mentioned was, ‘You’re going to be surprised how easy this is going to be,’ and it was.

“This game, it was just ‘we’re better than you,’ and everybody after the game had all kinds of excuses. I heard Alabama players afterwards talking about, ‘Aw man, he was just lucky, throwing balls up.’ Hey, they kicked you all over the yard. This was men versus boys… I just got a kick out of some of the stuff I heard before the game from some media members that acted as if Clemson doesn’t even play football, and it was like, you know, there’s a reason we keep score. You may be right – Alabama may be the greatest team. But this other group over here, let’s not pretend like they’ve never beaten Alabama before in the national championship game.”

Clemson, of course, also defeated Alabama in the 2016 national championship game to win its first national title at the time since 1981.

“With that defensive front, you knew they had a shot, and Trevor Lawrence that night was great,” Packer said. “Of course, he turned out to be a pretty good player. First pick in the draft last year. Great wide receivers, great staff. I mean, that was just one of those things that sometimes folks in the media get carried away with what they think and start just throwing stuff up against the wall, and then they don’t like when they’re held accountable when people bring up what they said prior to, and then they make vendettas and go after people after the fact, and that happened with Clemson.”

Packer added that the thing he remembers most about Clemson’s beatdown of Bama was the Tigers’ final possession – a 14-play, 94-yard drive that exhausted the final 10 minutes and two seconds of game clock and ended the contest, which really wasn’t much of a contest.

“I don’t think I have ever seen Alabama football throw the white flag,” Packer said. “That was one of those, hey, we just want to get out of here. I can’t remember another time watching a Nick Saban team just get manhandled. I mean, at the point of attack, they were embarrassed… And that was a quote, according to some who follow the SEC religiously, ‘the greatest college football team ever.’ You almost had to laugh, like dude, how embarrassed are you. Because that was an absolute woodshed job.” 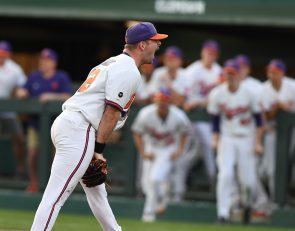 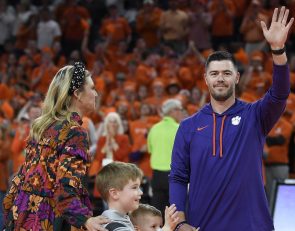 Packer on Riley: 'Game's on' 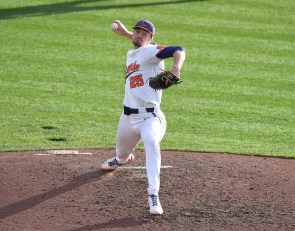