Clemson has begun to expand its recruiting board at the defensive end position.

Even after the addition of St. John’s (Washington, D.C.) four-star edge rusher David Ojiegbe, defensive ends coach Lemanski Hall and other members of Clemson’s defensive coaching staff are in pursuit of some additional targets in the class of 2023.

One of those targets is Southern (Durham, N.C.) four-star Jaybron Harvey, who The Clemson Insider has chatted back and forth with this week. After talking with Hall Wednesday, Harvey messaged us to tell us that Hall really likes him and this past Friday, he was reevaluating everybody on his board and would call him this weekend.

Harvey — a 6-foot-4, 216-pound rising senior — was unsure if that call was going to be about an offer, but Hall did say that a big thing with Clemson is getting on campus.

The Tar Heel State target was able to shed further light on his Clemson interest and his relationship with Hall, as well as the rest of his recruitment this weekend.

“They said they really liked me, how I look, my game, my personality…but the big thing they said was for me to come down to campus,” Harvey said.

“My relationship with Coach Hall is good,” he continued. “It’s getting even better along the way as I take this journey call after call.”

In addition to Ojiegbe, Clemson has dispensed offers to less than 20 defensive ends in the 2023 recruiting class. While about seven of them have confirmed their plans to participate in Clemson’s official visit weekend from June 3-5, that doesn’t necessarily mean that the Tigers will automatically earn their commitments.

That’s why Hall is still tinkering with his defensive end board and why a player like Harvey is on Clemson’s radar.

“An offer from Clemson is big time,” Harvey said, “because you know it’s Clemson, a big-time school, and them giving me an opportunity to play for them is everything.”

Asked which schools were currently recruiting him the hardest, Harvey only mentioned North Carolina. While he’s still trying to figure out when he’ll eventually visit Clemson, he’s set four visits to Oklahoma, South Carolina, Louisville and, of course, UNC.

Harvey, who 247Sports considers to be a top-25 edge rusher in his class, describes himself as being a “twitchy, fast and powerful” player, who has the natural pass-rush ability and good play recognition. 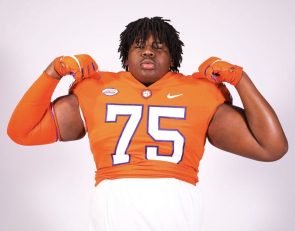 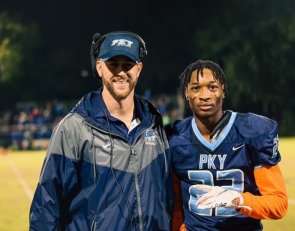