The Clemson Insider caught up with a fast-rising Massachusetts-based athlete, who has recently emerged as one of Clemson’s top receiving options in the 2023 recruiting class.

“It’s great, I’ve been talking to Coach (Dabo) Swinney and Coach (Tyler) Grisham a lot,” Hanafin said when asked what he’s been hearing from Clemson since he last visited in March. “Coach Grisham has been reaching out, calling, FaceTiming, texting, all that kind of stuff. Just  really building that relationship and looking forward to getting there in June.”

“He’s definitely a great guy and a great coach,” Hanafin added of Clemson’s wide receivers coach. “He talks to my dad a lot and he really likes him and I think it’s mutual. Definitely a great relationship that’s building.”

For Hanafin, Clemson being different from a lot of other places he’s visited helped prompt an official visit. He enjoys the people there and has been in contact with players like freshman quarterback Cade Klubnik.

“Building a relationship with a lot of those people, players and coaches there is definitely really important to me,” he said.

In addition to Clemson, Hanafin has scheduled official visits to Notre Dame and Alabama. He’s unsure if he’ll take any more, but he’ll have two official visits left to take if he decides to do so.

When Hanafin officially visits Clemson in less than two weeks now, he said he’s looking forward to seeing the program a little bit more in-depth, as far as academics, football and the stuff he didn’t get to see during his unofficial.

Hanafin will be just finishing his junior year of school come June 2, so his Clemson official visit will be a nice way to kick off summer vacation.

During that big recruiting weekend, Hanafin will have a chance to spend time with some other prospects like Briarwood Christian (Alabama) four-star quarterback Christopher Vizzina, who pledged to Clemson back on April 12.

“I’ve been in contact with a couple of them like I said, like Cade and stuff,” Hanafin said. “I’ve also been in contact with Vizzina. We’re starting to build that relationship, so if we do happen to end up at the same school, we already have that connection and chemistry.”

It’s clear that Clemson views Hanafin as a priority in this recruiting class. Grisham stopped by Buckingham Browne & Nichols School during the evaluation period and even stayed for one of Hanafin’s lacrosse games.

That really meant a lot to Hanafin and goes a long way for him.

Another thing that goes a long way is his relationship with Clemson’s head coach.

“Yeah, that is very cool,” Hanafin added. “He’s a great guy and my dad and my mom really loved talking to him when we were down there. We sat in his office for about an hour and kind of talked through our families and all that stuff. We have a lot in common like through faith and morals. It was definitely great to be able to talk to him and continue to build that relationship too.” 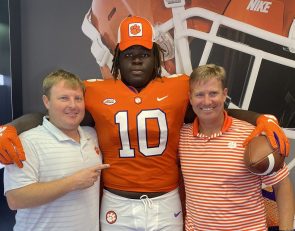 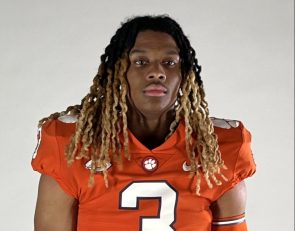