After visiting the University of Georgia earlier this week, one of the nation’s premiere pass rushers found himself on Clemson’s campus Wednesday.

Salpointe Catholic (Tucson, AZ.) 2024 five-star Elijah Rushing visited Clemson for the first time earlier this week and left campus with an offer in hand. He spoke with The Clemson Insider about his experience in Tiger Town and gave the latest on his current recruitment.

“I enjoyed it a lot,” Rushing said. “We got to ride around the campus, see the facility and I got to talk with Coach (Lemanski) Hall. It was just an overall great experience.”

Rushing had a “hope” that an offer from Clemson would come his way during the visit, but he couldn’t say with absolute certainty that he was expecting to earn one on his visit.

“Clemson’s a big name and the top in the ACC, so that was big for me and I was just blessed to be in that position,” he said of receiving an offer from the Tigers.

Wednesday was actually Rushing’s first time talking with Hall. He described Clemson’s defensive ends coach as a “straight shooter” and an “honest dude.”

Rushing also learned that when Hall was at the University of Alabama, he faced off against his father, who played for the University of Florida in the early ’90s. Wednesday’s visit allowed for the two to catch up and talk about their college playing days.

“Just getting to talk with coach for the first time and getting to know him,” Rushing said. “Him getting to see me and get to feel my vibe and I get to feel his; I was just blessed to be in that position.”

Rushing had previously been in contact with Wesley Goodwin, but Clemson’s defensive coordinator was on his break. He’s looking forward to meeting him at a later date, but enjoyed taking his visit with Hall.

After seeing what Clemson had to offer, Rushing said that he would definitely like to return to Tiger Town at a future date. He liked the vibe of the program, but he also noted that it’s early in his recruitment and he’ll need to look back at everything from an objective standpoint.

Traveling from Arizona to South Carolina during his junior season might be a bit difficult for Rushing, but he did indicate that he’s willing to make it to Memorial Stadium for a game day visit sometime this fall.

While Clemson figures to play a role in hgis recruitment going forward, Rushing was able to give the latest on a process that has started to really pick up for him.

When Rushing does go on these visits, what is exactly looking for at a school at the next level?

“I just learn as much about the scheme and what they do and some things I can do to be better going back,” he continued, “but definitely paying attention to what is their campus lifestyle like? How do the players interact with each other? How do they interact with the coaches? How is the overall family vibe — because that’s something that’s important to me. And then, just the academic piece; what are their programs like? Football’s gonna end at some point and you always want to have something to keep you moving.”

Rushing describes himself as a long, rangy end with a quick first step and good speed off the edge. He also brings the overall package between his speed, power and effort.

— Photo for this article courtsey of @elijah_rushing on Twitter.

No fanbase is more passionate about winning. Clemson fans and businesses have always stepped up to provide what is needed for the Tigers to compete with the best. The college landscape has changed with name, image and likeness. Dear Old Clemson will do things the ‘Clemson way’ to support a grassroots effort to help the best fanbase in the nation meet this new challenge. Visit Dear Old Clemson to find out how you can help! 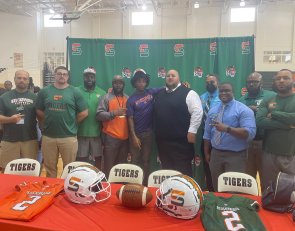 STOCKBRIDGE, Ga. — Clemson picked up its latest commitment Monday morning from a Peach State defensive back, when Stockbridge (Ga.) High School three-star Shelton Lewis announced his commitment to the (…)