Will Taylor is back in the fold for the Tigers and the two-sport standout is as confident as ever.

The sophomore wideout is recovered from the torn ACL he sustained against Boston College last October. He spent the spring with the baseball team, making his return to competition as a designated hitter and outfielder for the Tigers.

“I feel like I’m definitely faster than I was 12 months ago,” Taylor said Monday. “I’m just trying to get the moves back and get the lateral movement back. The past (four) days have been great so far, so I’m excited to keep on going.”

After not being able to partake in any of Clemson’s spring practices, Taylor is ready to compete and officially complete that transition to the wide receiver position.

A dual-threat quarterback during his high school career at Dutch Fork, Taylor took some direct snaps last season and also lined up at slot receiver, which will be his primary position going forward.

He had five carries and two receptions to go along with a kickoff return and six punt returns, including a 51-yarder against South Carolina State, before the injury.

It’s been roughly 10 months since Taylor was on a football field, but once he got over the mental hurdles that come with a significant injury, it was easy for him to move on.

Taylor was able to regain some of that confidence when he debuted for Clemson’s baseball program during the final stretch of the 2022 season. In 13 games, he hit .260 with 14 runs, a homer, four RBIs, a .320 slugging percentage, .397 on-base percentage, nine walks and a steal.

Those 13 games were pivotal for Taylor’s confidence, especially as he received some self-assurance from that surgically repaired knee.

“I’m 100% confident. Absolutely. If I wasn’t 100% confident, I wouldn’t be out here practicing,” Taylor said. “Obviously, still wearing that knee brace, but it’s just protection out here because we’re doing a lot. But, I don’t even think about it. I feel faster. I feel better than I did last summer.”

Taylor is hopeful that he’ll be able to shed the brace in a couple of weeks. 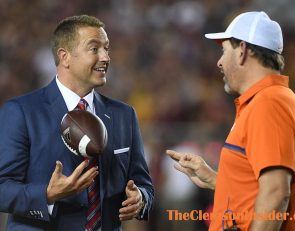 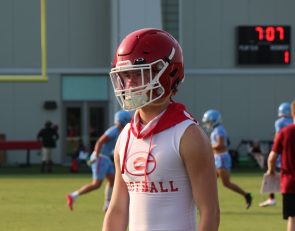