The Clemson Insider has decided to take a relatively old concept and put a new spin on it. As we already introduced on our message board, TCI will field weekly recruiting mailbag questions, which will be answered in an article format. We’ll choose questions to answer and provide you with the most relevant information regarding Clemson recruiting.

Without further ado, we took a crack at answering some of your mailbag questions. It should be noted that the questions have been edited for clarity.

Clemson is no longer at the forefront of Monroe Freeling’s recruitment. For a while, the Tigers seemed to be the perceived favorite to land the Oceanside Collegiate Academy product, but as we know, things are fluid in recruiting.

To no fault of his own, Freeling was unable to make Clemson’s official visit weekend. It was his parents’ anniversary the weekend of June 3 and it unfortunately just didn’t work out with his schedule. That paved the way for the trio of Vandegrift (Texas) four-star Ian Reed, Permian (Texas) four-star Harris Sewell and Eagle’s Landing Christian Academy (Georgia) four-star Zechariah Owens to verbally pledge to Dabo Swinney’s program in the coming weeks.

While Clemson is set with taking three offensive linemen in the class of 2023, there’s been chatter that Thomas Austin could possibly take a fourth commit. Whether that would be Freeling hinges on a couple of things, but as of August, the likelihood that he’ll end up at Clemson has grown increasingly unlikely.

We know Clemson really likes the prospect, as Swinney and Co. have attended his basketball games and such, but that arrow that was once pointed at Clemson and since trended in another direction.

Freeling has made official visits to Notre Dame, Miami and Florida. Whether Freeling takes those remaining two officials remains to be seen, but the teams most heavily involved appear to be the latter programs mentioned, as well as Alabama and Georgia.

Q: Any traction with any RB?

It goes without saying, that Clemson continues to evaluate its options at the running back position.

A name that I’ve heard in some circles is Heights High (Kansas) four-star John Randle II. While he’s ranked as the No. 20 running back in the nation, per the 247Sports composite, you’re looking at a player whose recruitment is still waiting to take off.

I don’t know how much traction Clemson has with Randle if any, but he’s a name worth monitoring as he heads into his senior season.

Q: How many more do you think we’ll take before we shut it down?

This is always a fun question.

My best guess would be two or three more prospects, which would put Clemson’s class at either 22 or 23 commitments. Anything can happen between now and then, whether a player enters the transfer portal or decides to step away from the game like Landen Zanders did earlier this month.

As we know, these things tend to be fluid. That’s not to say that I expect a Clemson player to enter the transfer portal or anything of that nature. More so, we’d be naive to assume that the ever-changing landscape doesn’t affect roster turnover and the number of scholarship players that a program like Clemson has to work with at any given time.

Q: What are the biggest needs now?

While Clemson recently placed Domonique Thomas on scholarship, it’s worth noting that Keith Adams, Jr. is the last running back to commit to Clemson since Will Shipley did so on May 5, 2020. It’s a position that Clemson hasn’t had much success with on the recruiting trail as of late, just barely missing out on the likes of Trevor Etienne (Florida), Andrew Paul (Georgia) and Jeremiah Cobb (Auburn),

From what we’ve heard regarding CJ Spiller — he’s a good coach with the necessary recruiting chops. Clemson’s lack of movement at the position on the trail shouldn’t be an indictment of who he is as a coach. As we previously mentioned, Spiller did a nice job of identifying a guy like Paul, who was one of the best high school backs in the state of Texas.

Q: Any traction with Tomarrion Parker and a visit for the season?

I answered this on our message board, but for our readers who didn’t get a chance to see this, Clemson has a lot of traction with Tomarrion Parker. The four-star defensive end out of Central (Alabama) is eyeing an official date of Oct. 22, which would be the weekend that Clemson plays host to Syracuse at Memorial Stadium.

There is mutual interest here, as Parker wants to take a long, extended look at Clemson, now that the Tigers have extended an offer.

Q: Are we done at WR with the Ronan (Hanafin) commitment or will we continue to push for Tyler Williams to sway him away from the Dawgs?

As of now, Clemson is only planning to take two wide receivers in the class of 2023 and some pretty good ones at that. With Sunday’s commitment, Buckingham & Browne (Massachusetts) four-star wide receiver Ronan Hanafin joined Rockwall (Texas) four-star Noble Johnson, as the two receivers that Clemson will be taking in this class.

Earlier this year, some prospects informed TCI that Clemson was looking to add up to three wide receivers in this class because it was likely going to be losing a number of wideouts after the 2022 season. It’s entirely possible that Clemson’s thinking has changed since the end of January.

That would make Clemson an unlikely suitor for Lakeland (Florida) four-star Tyler Williams, but my hunch is that has more to do with his recruitment trending in the direction of Georgia and less to do with numbers. Williams sent a commitment date of Sept. 27 and will pick between Clemson, Georgia, Texas A&M, South Carolina and Ole Miss.

Williams has one official visit remaining and with a month and change until he renders a college decision, the University of Miami is rumored to be pushing for him to take his final visit to Coral Gables.

Clemson hosted Williams during the program’s official visit weekend from June 3-5. From what we gathered, Williams mostly kept to himself during the weekend’s festivities. That’s not a knock on Williams, who has spoken very highly of Clemson in the interviews he’s done in the past, but rather an observation from a source that we wanted to pass along.

Many in the industry have Williams pegged as a Georgia guy, but that remains to be seen, as other programs continue to push for his commitment. I just wouldn’t expect him to land at Clemson at this time.

I’m not going to make any projections at the moment, but the next possible commitment in terms of announcement timing is North Gwinnett (Georgia) four-star defensive lineman Kayden McDonald. The expectation is that he’ll be taking an official visit to Clemson sometime this fall. 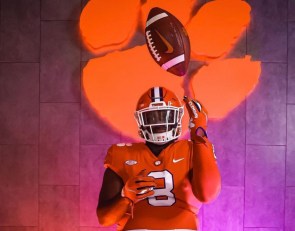