Strength of Clemson's secondary lies in its versatility

Strength of Clemson's secondary lies in its versatility

Clemson could run four defensive backs onto the field to start against Georgia Tech in the team’s Labor Day opener two weeks from now. It could be as many as five or six depending on how defensive coordinator Wesley Goodwin best believes the Tigers match up with the Yellow Jackets’ offense.

Given teams often see contrasting offensive styles from week to week throughout the season, it isn’t unusual for defenses to vary the number of defensive backs they utilize depending on offensive personnel as well as down and distance. What is different about Clemson’s secondary heading into the new season is that its defensive backs may not all line up in the same spot from play to play.

That’s because Goodwin has what he considers a bunch of Swiss army knives at his disposal.

“Like MacGyver I guess,” Goodwin said, referencing the famous TV duo. “We’ll see how all that plays out, but it’s a lot of fun. I can tell you that.”

According to Goodwin and his defensive backs, versatility will be a strength of Clemson’s secondary. Some of them, such as cornerbacks Sheridan Jones and Nate Wiggins, will be mainstays at their given positions, but many have the flexibility to play a little bit of everything on the back end of the defense.

“I feel like that’s the most versatility I’ve seen with any secondary in the country.”

Greene’s return further adds to the secondary’s depth. The Tigers’ junior corner is healthy again after undergoing an offseason operation on a shoulder injury that limited him to 10 games last season. Primarily a nickel to this point of his career, Greene has never played the outside corner position in a game for Clemson but has split his reps between the two during preseason camp.

Barrett Carter is another athletic defender that could do more than play the Sam linebacker spot. The sophomore is taking over as the starter there with Trenton Simpson moving to Will ‘backer, but Carter has the speed and coverage ability to play safety or even nickel in a pinch.

But there may not be a more versatile defender on the back end than Mukuba, a freshman All-American safety last season who repped at every position in the secondary during the spring. He has continued to move around during camp.

“He’s got as good of cover skills as anybody in the back seven,” Goodwin said of Mukuba. “You can blitz him. He plays with great depth and vision from the middle of the field. There’s lots of things he can do.”

Greene said it gives the defense plenty of options to choose from when it comes to deciding on personnel groupings from play to play.

“It’s really on the wants of coach Wes Goodwin based on the tendencies of certain offenses and the skill set of each guy that can do different things,” Greene said. “He might want one guy in there that’s got a bigger body at nickel based on different things that guys do with their offense. And then some teams are more pass-first and have some real skill guys at receiver, so he might just want more cover guys in there. He just balances between the two, but I feel like all of our guys that get in there in the slot at nickel can cover and can play the run really well. I can’t wait to see how it goes.”

Having that many defensive backs with diverse skill sets also gives the group confidence that it can consistently produce at a high level regardless of any circumstance that may play out throughout the course of a long season.

“I feel like it really gives us a great leg up,” Greene said. “If one man goes down, we always know we have another guy that can go in and produce also at that spot. And really (have) no dropoff.” 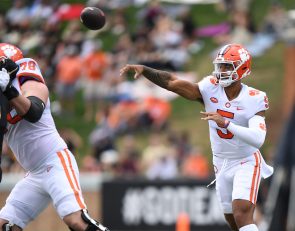