There was some major Clemson-on-Clemson crime in a wild NFL game Sunday.

In overtime of the game between the Las Vegas Raiders and Arizona Cardinals, Hunter Renfrow caught a ball and fumbled for the second time in three plays when fellow former Tiger Isaiah Simmons jarred the ball loose with a hit on Renfrow.

Byron Murphy Jr. scooped up Renfrow’s fumble and returned it 59 yards for a touchdown with 3:51 left in overtime to give the Cardinals a 29-23 win in a game in which they trailed by 20 points in the second half.

Check out what they are saying about the Tiger-on-Tiger crime:

SCOOP AND SCORE FOR THE WIN!

Ballgame. What an absolute wild finish. Hunter Renfrow fumbles the ball fighting for yards and the Cardinals return it 62 yards for a touchdown and that’s the game in OT. What an unreal game.

#Cardinals comeback to win in OT as Isaiah Simmons forces Hunter Renfrow fumble that Bryon Murphy returns it for a scoop and score.

Heck of a play by Isaiah Simmons, knocking that ball out of the hands of Renfrow#AZvsLV 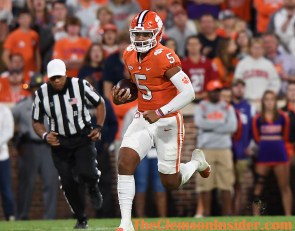