Following Clemson’s double-overtime win over Wake Forest in Saturday’s top-25 matchup in Winston-Salem, a few ACC analysts weighed in on DJ Uiagalelei’s stellar performance and gave their takeaways from the Tigers’ thrilling 51-45 victory.

On “The ACC Huddle” on ACC Network, former Miami and Georgia head coach and current ACCN analyst Mark Richt was asked what he learned about Uiagalelei during his incredible afternoon against the Demon Deacons.

Clemson’s junior quarterback completed 26-of-41 passes for a season-high 371 passing yards and a career-high five touchdown passes while racking up 423 yards of total offense (371 passing, 52 rushing) to lead the Tigers to their 14th victory in a row over Wake Forest.

“He looked like the DJ U everybody got excited about when he lit up Notre Dame a couple years ago,” Richt said, referring to Uiagalelei’s epic game against the Irish as a true freshman in 2020, when he went 29-of-44 passing for 439 yards and threw two touchdown passes to go with a rushing score.

“That’s what he looked like, and it’s just so awesome to see him play the way he played. … It’s just great that Dabo and the rest of the staff stuck with him, and now it’s paying off.”

Against Wake Forest, Uiagalelei became the first Clemson player to throw for 300 or more yards, rush for 50 or more yards and throw at least three touchdowns in a game since Deshaun Watson accomplished the feat against Louisville on Oct. 1, 2016.

ACCN analyst EJ Manuel was impressed by the way Uiagalelei went toe-to-toe with Wake Forest quarterback Sam Hartman and helped the Tigers’ offense repeatedly punch back in response to the points put up by the Demon Deacons’ high-powered attack. 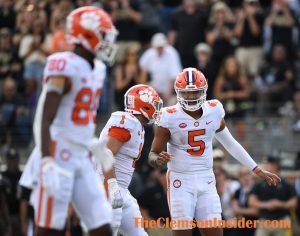 “DJ played like ‘Big Cinco’ (Saturday). No ‘Little Cinco’,” said Manuel, the former Florida State and NFL quarterback. “He’s playing like a big dog, man. But you’ve got to do it when you play against a Sam Hartman at quarterback. You know Sam can light up the scoreboard, whether he’s throwing the ball, running the ball, making plays. But DJ was answering every single time, and there were moments when they could’ve packed up and said hey, Wake got us – you know, we’re on the road, it’s a hostile environment. But he kept delivering.”

“The receivers stepped up,” Royal said. “DJ had been playing similar to this all year long, it’s just the receivers weren’t making the plays. They stepped up big for him and made the plays, so it’s good to see.”

Richt gave a shoutout to Clemson sophomore running back Will Shipley, who rushed 20 times for 104 yards with a touchdown against the Demon Deacons.

Shipley has now rushed for 100 yards in consecutive games for the second time in his career and has now rushed for a touchdown in seven straight games, dating to last season. Shipley (1,091) surpassed 1,000 career rushing yards with a career-long 53-yard rush in the first quarter and scored on a 1-yard touchdown run on an impressive second effort in the fourth quarter.

“I’ve got to give props to Shipley, too,” Richt said. “Shipley took care of business. He did break out on a deep run. Little surprised he got caught. But then in the end zone area, he busted through some tacklers and made a touchdown run.”

Royal was asked if he saw anything in the Wake Forest game that made him question whether the Tigers are a College Football Playoff-caliber team, or if Saturday’s game furthered his belief that they can make it into the four-team playoff field.

“It furthered my belief because everybody was worried about the quarterback position, and DJ stepped up (Saturday),” Royal said. “And like you said, Shipley stepped up as well, so they were balanced. DJ didn’t have to do it all. Shipley did enough as well. They’ve got three running backs that can get it done as well. … So, this is a complete offense, and we know that defense is gonna step up.”

“I felt like if DJ played like that, no one can be close to Clemson,” Richt added. “But Wake proved me wrong, too.” 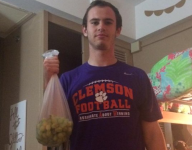 In a recent post on the Las Vegas Raiders’ Twitter page, a few players were asked to talk about their most embarrassing rookie moments. Former Clemson star Hunter Renfrow, not a stranger to sharing his (…) 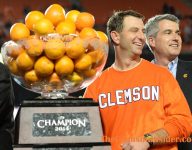 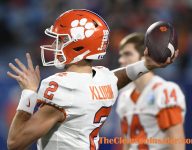 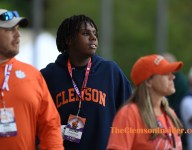 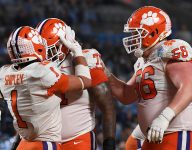 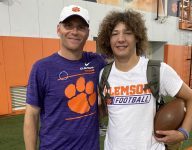 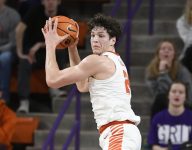 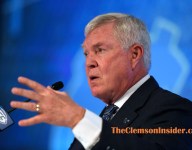 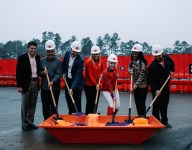