CFP committee chair explains why Clemson is ranked behind Alabama

CFP committee chair explains why Clemson is ranked behind Alabama

Davis asked Corrigan what Clemson does at an elite level that looks like a playoff team, and how Corrigan would describe the discussion about the Tigers and the evaluation of them within the committee meeting room.

Corrigan went on to explain why the CFP committee has Clemson ranked behind Alabama.

“You’re looking at the football judgement, right, as we’re going through this,” Corrigan said. “Clemson’s 6-1 against teams over .500, Alabama’s 6-2 with teams over .500. They’ve got the two close losses, obviously Alabama does. And then that game against Notre Dame, that 35-14 game, continues to be part of the discussion.

“You look at Clemson — defensively, they’ve got some dudes up front that are making plays and doing things, too. But overall, we saw Alabama as being 7 and Clemson 8.”

Alabama suffered a pair of losses at Tennessee and at LSU on a last-second field goal and two-point conversion in overtime, respectively.

The Tigers will wrap up the regular season against rival South Carolina at Death Valley on Saturday (12 p.m., ABC), while the Tide will play host to Auburn for the annual Iron Bowl (3:30 p.m., CBS). 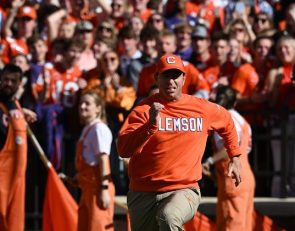