Saturday’s ACC Championship versus North Carolina hits close to home for Clemson running back Will Shipley.

The sophomore, who hails from Weddington, N.C., grew up a big NC State fan and says playing his childhood rival adds a little more fuel to the fire ahead of the matchup this weekend.

“Yeah, you know I’ve kind of cut ties with both programs,” Shipley joked. “You know, obviously joking, but just growing up an NC State fan, you hate the Tar Heels, that’s just how it is. Every family reunion, no blue whatsoever or you’d have to leave the house, so there’s definitely a little bit of fuel to the fire, that’s just how I grew up.”

Despite his family connection to the Wolfpack, North Carolina head coach Mack Brown tried his best to get the running back, who was the top player in the state of North Carolina at the time, to make Chapel Hill his home for the next four years, though Shipley eventually chose Clemson over both the Tar Heels and NC State.

Brown reportedly said in his Sunday press conference following the loss to NC State last weekend that he “got really close” to Shipley’s grandmother, Patricia, in the recruiting process, though it proved to not be enough for Shipley to choose North Carolina.

“Yeah, I saw that tweet,” Shipley chuckled. “They did a great job of recruiting my family and I. I guess he thought that if he was able to get close with Nini — Nini’s what we call her, she’s the sweetest thing ever — if he was able to get close with her then they’d have a better chance. I mean, they texted and called all the time. I actually had to tell her a couple of times like, ‘Nini, you gotta chill out. You don’t know how this stuff works. You gotta know what they’re trying to do here.’ But yeah, they definitely did get close to her in recruiting.”

During Will Shipley's recruitment, Mack Brown got close with his grandma, Nini.

"I had to tell her a couple times, Nini, you gotta chill out … you gotta know what they're trying to do here." 😂 pic.twitter.com/oQlzVmYnoq

All jokes aside, Shipley has his focus locked in on Clemson’s ACC Championship matchup against the Tar Heels this weekend with hopes of taking home his first conference title as a Tiger.

“At the end of the day, we’re just trying to go win another championship and send these seniors off with an ACC Championship ring and beyond that,” he said. 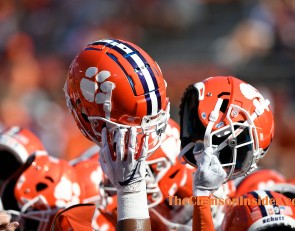