Clemson (11-2, 9-0 ACC) stayed at No. 11 in the new coaches poll following its 39-10 win over North Carolina in the ACC Championship Game on Saturday night at Bank of America Stadium in Charlotte.

With the win over the Tar Heels, the Tigers claimed their seventh conference championship in the past eight years, and became the first program to win 21 ACC titles.

You can see the full coaches poll following championship weekend below: 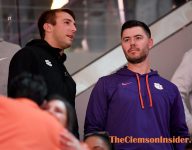