The nation’s top-ranked linebacker in the 2024 recruiting class will return to Clemson this weekend.

Jefferson (Ga.) High School five-star Sammy Brown is set to be back on campus Saturday for the Tigers’ elite junior day.

The 6-foot-3, 235-pound blue-chipper previewed the visit in an interview with The Clemson Insider.

“I really look forward to getting back to Clemson and just catching up with the coaches,” Brown said. “I think the best part about it is that this will be the first time where 2024s (class of 2024 recruits) are the priority, so it will be cool to see how it goes.”

Brown made his way to Tiger Town a bunch of times in 2022, most recently for the South Carolina game in late November after attending the Furman and NC State games in September and October, respectively. He received Clemson’s first class of 2024 offer last March when he was on campus.

The No. 1 linebacker in his class, per both 247Sports and the 247Sports Composite rankings, Brown continues to communicate regularly with members of Clemson’s staff including defensive coordinator/linebackers coach Wes Goodwin.

“I’ve been pretty consistently talking with Coach Goodwin and others,” Brown said, “and we’ve been talking about how excited we are for the visit and just catching up like I said.”

“I really like Clemson and what they’ve been able to do in the past couple years,” he said. “Their culture is almost unmatched, and they’ve been highly successful lately.”

Along with Clemson, Brown – who owns more than two dozen offers – has narrowed his focus to a handful of suitors at this point in his recruiting process.

“Other schools I’ve been focusing on are Georgia, Tennessee, Oklahoma, Notre Dame, Ohio State,” he said. 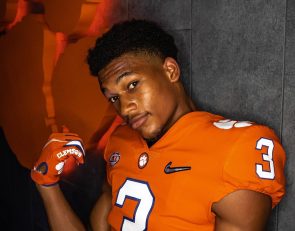 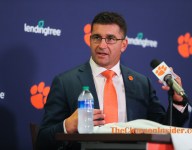