Adams: "I will get to Clemson"

Adams: "I will get to Clemson"

“The game went good.  I don’t have my stats yet but I know I did pretty good.  I scored on one play when I ran the ball.  I had a couple of sacks.  The last game I had three.  My goal is to get 20 sacks for the season so I have to keep that up,” said Adams.

Why did the prize recruit not make the visit to Clemson on Saturday?

“I just had to do some stuff after our game so I couldn’t make it,” said Adams.

Montravius did take time to watch the Clemson game against Ball State on TV.

“I watched it.  It was a good, well it wasn’t really a good game as Clemson won easy,” said Adams.

The 5-star defensive tackle likes what coach Venables is doing with the Clemson defense and believes he could  help in the future.

“I definitely think the defense is getting better under coach Venables.   I think I could help the defense at Clemson,” said Adams.

A Big Ten trip is planned for this weekend.

“I will probably go to Michigan State this weekend and watch them play Notre Dame,” said Adams.

Although Mountravius didn’t make it to Tigertown this weekend, he plans to catch a game in the Valley later this year.

“I will get to Clemson.  I am not sure which game yet,” said Adams. 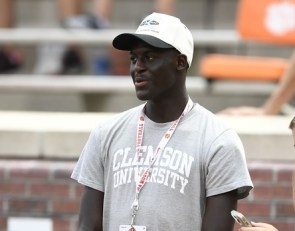