Defense’s goal: Get the ball back

Defense’s goal: Get the ball back

Stephone Anthony had one thing on his mind when he stepped back on the field following a Cole Stoudt interception that set Syracuse up at the Clemson 38 with 10:41 left in the third quarter Saturday night – get the ball back.

“We have to get back out there on the field, get a stop and get a turnover, hopefully,” the Tigers’ middle linebacker said.

There was no hoping. Clemson got the stop and got a turnover in the process. And oh by the way, it got the ball back on the very next play.

While keeping containment on Syracuse quarterback A.J. Long, Anthony watched the eyes of the quarterback and when he saw the freshman throw the ball in his direction, he was able to get his hands on it and pick it off at the Clemson 42 before returning it eight yards to mid-field.

“I was in position to make a play,” the senior said.

And what a play it was. It turned the momentum of the game and sparked the No. 20 Tigers’ to 13-unanswered points as they rallied for a 16-6 victory over the Orange in Death Valley.

“It was a huge play,” Clemson defensive coordinator Brent Venable said. “We talked about it at halftime, about how we were losing the turnover margin. Guys in the first half were saying, ‘We have to go make an interception.’ You can’t do that. You can’t press.

“You have to let the game, in an aggressive and precise way, come to you. You can’t press it and try to get outside the confines of the system. That’s what we stress. ‘Look, they will come.’”

Clemson recovered a Syracuse fumble in the third quarter and got Anthony’s interception. The Tigers finished the game with three takeaways overall as safety Robert Smith had a second-quarter interception as well.

The turnovers proved to be big as the defense once again helped carry the offense for a third straight week. Clemson turned the ball over four times, including fumbles by C.J. Davidson and Stoudt in the second quarter.

They did that often. Even if they did not get the turnover, they got stops. Clemson held the Orange (3-5, 1-3) to 170 yards of offense, including just 88 on the ground. It marked the fourth straight game Clemson held its opponent below its season average.

After Syracuse drove the ball 61 yards on 13 plays on its fourth possession of the night, which resulted in a Cole Murphy 41-yard field goal, the Orange had no drive longer than 27 yards the rest of the game and seven of them went for seven yards or less.

“If they don’t score, then how can they win? That’s our mentality,” Smith said. “Our job is to go out there and keep them from scoring.”

“This is how it has been happening,” defensive tackle Grady Jarrett said. “We kept them out of the end zone tonight. We just did our job and we just had to play with whatever the situation was. We held it down until the offense got going and when they got going we turned out with a win.” 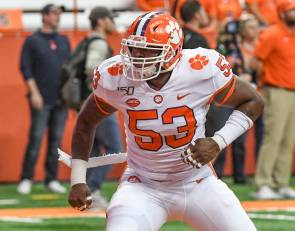