Clemson might have the best set of wide receivers in the ACC and two of its better prospects—Deon Cain and Ray Ray McCloud—are not even on campus yet. One might wonder if quarterback Deshaun Watson will have enough footballs to spread around in 2014.

When Sammy Watkins and Martavis Bryant left for the NFL following their junior seasons a year ago, many wondered if Clemson might find suitable replacements. It turns out it did.

Artavis Scott’s and Mike Williams’ production was not far behind what Watkins and Bryant did in 2013, and they did it without the services of their potential All-ACC quarterback for much of the year.

With Tajh Boyd throwing them passes—the Tigers all-time leader in passing yards, completions and touchdowns—Watkins and Bryant combined for 143 receptions for 2,292 yards and 19 touchdowns.

Scott and Williams spent much of this past year receiving passes from an injured Cole Stoudt, who doesn’t nearly have the arm strength or the accuracy of Boyd or Watson, and they still managed to catch a combined 133 passes for 1,995 yards and 14 touchdowns.  Not a bad year for a freshman and a sophomore.

Though Cain and McCloud are both five-star prospects, it will be hard for either one to come in and knock these two guys from their starting roles in Clemson’s offense. And that’s the point. Competition will make them all better in the end.

About: Scott became the Tigers’ big-play threat by the end of the season. His 68-yard catch-and-run for a touchdown against Wake Forest was a game changer. He had two back-breaking touchdowns of 53 and 70 yards in Clemson’s win over South Carolina, while his 65-yard touchdown to open the Russell Athletic Bowl set the tone for the night in the Tigers’ 40-6 victory. Scott finished his first year with a team-high 76 catches for 965 yards and a team-best eight touchdowns.

Strengths: He is a good open field runner that knows how to make people mix. I always refer to him as poor man’s Antonio Brown due to his ability to make people miss in space. He runs very good routes.

Weaknesses: The reason I call Brown a poor man’s Antonio Brown is due to the fact he does not have the speed that Brown has. However, he can continue to get a little faster with more speed-training this winter. Scott’s overall strength is fine, he is a lot bigger than people realize. He just needs to be more physical in rushing plays and getting off the line in press coverage.

About: Williams is perhaps Clemson’s most explosive wide receiver. He led the Tigers with 1,030 yards—marking the fourth straight year Clemson has had at least one 1,000-yard receiver—on 57 catches. He scored six touchdowns and averaged 18.1 yards per reception. He had 20 receptions of at least 20 yards, eight more than Scott, and all of them came on throws down field.

Strengths: He is faster than one might think. He uses his big strides to blow past defensive backs. He is also very athletic as he is able to high-point a ball from anywhere on the field, while also making spectacular diving catches like he did against NC State last year.

Weaknesses: Williams needs to bulk up a little more, which will probably take his game to another level. Much like Martavis Bryant, Williams has the frame to get up to 220 pounds which can help him become even a better target on jump balls and fades.

About: Hopper had an up-and-down season last fall as it seemed he dropped as many passes as he caught. He still finished the year with 27 catches for 331 yards and three touchdowns. His 331 yards ranked third on the team.

Strengths: Has very good speed and has the ability to make big plays like he did against North Carolina and Oklahoma.

Weaknesses: He can stand to gain at least another 10 or 15 pounds which will make him stronger and perhaps even faster. He needs to work on looking the ball in more as he showed several times during the year that he sometimes starts running before he catches the ball. 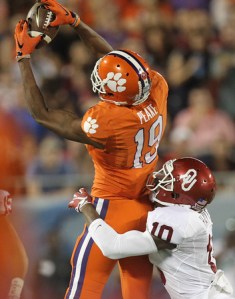 Charone Peake will be back for his senior year at Clemson. He caught two passes for 40 yards in the Tigers’ 40-6 victory over Oklahoma in the Russell Athletic Bowl last month.

About: Because of complications due to the ACL injury he suffered in 2013, Peake played in only seven games last year as he missed five straight after playing in the first three games of the season. His best game came against Oklahoma when he had two catches for 40 yards. He finished the season with just 12 receptions for 129 yards and two touchdowns.

Strengths: He has perhaps the best hands on the team which he displayed with his touchdown catch at Georgia and against S.C. State in the back corner of the end zone. He also runs good routes and when healthy has exceptional speed.

Weaknesses: Unfortunately he has been injury prone. His biggest weakness is his inability to stay on the field for an extended amount of time.

About: Thompson redshirted last season after coming to Clemson last July. From what we have heard the power-hour sessions he had during the season have done wonders for his game and he is expected to be a factor in competition when spring drills begin on March 2. A four-star prospect from Durham, N.C., Thompson had 57 receptions for 957 yards and 14 touchdowns during his senior year at Hillside High School.

Strengths: Like Williams, he gives Clemson another tall and lean receiver that can go up and get the ball in the red zone.

Weaknesses: He is not as smooth and as crisp at running routes as the others right now. Also needs a better understanding of the offense and needs to bulk up another 15 to 20 pounds.

About: A three-star prospect from Decatur-Columbia (Ga.), Bell is the No. 46 ranked wide receiver in the country, according to the 247 composite rankings. During his injury-riddled senior year, Bell had 23 catches for more than 300 yards with three touchdowns. As a junior, he had 45 catches for 600 yards and seven scores.

Strengths: Bell already possesses the size and strength to play as a freshman. Since he arrived to campus in January, he’ll have a full seven months to show he’s ready to make an impact in year one. In addition to his natural ability as a pass catcher, Bell also has an impressive catch-radius.

Weaknesses: One would assume that the Clemson strength staff will focus on Bell’s speed-training. According to his Rivals profile, Bell has a 40-time of 4.58. Like many first-year wide receivers, Bell could also polish his skills as a route-runner.