It was not uncommon last year to see Clemson’s defense line up this way.

Safety Jayron Kearse creeping up to the line of scrimmage showing blitz, fellow safeties Robert Smith and Jadar Johnson showing Cover 2 on the back end, nickel back Korrin Wiggins covering the wide receiver in the slot, linebacker Stephone Anthony acting as if he is dropping into coverage, while cornerbacks Mackensie Alexander and Garry Peters played zone coverage on the outside.

“You don’t want to give a quarterback a pre-snap read,” Wiggins said. “You want to try and throw him off as much as possible which will in turn help us. That is what we are trying to do.”

No quarterback was confused more about what the Tigers were throwing at them last year than Louisville’s Reggie Bonnafon. A true freshman at the time, Bonnafon had trouble deciphering Clemson’s defense and seldom picked up the right call.

He was sacked four times—all in the first half—and completed just 5 of 13 passes for 39 yards. Perhaps the biggest play of the game came when he failed to recognize the corner blitz at his own nine-yard line as Peters came off the edge and striped the ball loose which defensive end Tavaris Barnes recovered for a Clemson touchdown.

Bonnafon was replaced at halftime. But it wasn’t all Bonnafon’s fault. Clemson confused even the more veteran laden quarterbacks last year, especially when defensive coordinator Brent Venables showed the look that had subsequently four safeties on the field at the same time. 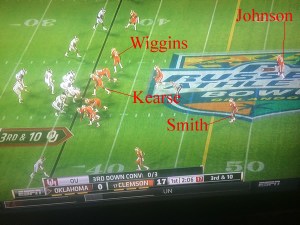 This is a defensive look in Clemson’s 40-6 victory over Oklahoma. Clemson’s defense ran a lot of this four-safety look in its dime package last season.

Wiggins, who splits time as a backup safety, plays the role of a sixth defensive back in Venables’ dime packages. Most coaches are forced to play a true cornerback in their dime packages as opposed to a guy who normally plays a safety position.

In other words, the Tigers have four safeties on the field at the same time, which gives Venables all kinds of options.

“I love it. It gets more cover guys on the field and more speed. We just get out there and have fun,” Wiggins said.

Clemson had a lot of fun last year. All the confusion allowed the Tigers to lead the country in tackles for loss and rank sixth nationally in sacks. Quarterbacks did not know who was coming or where they were coming from half the time, which played a big role in why Clemson led the nation in passing efficiency defense and was fifth overall in completion percentage defense.

“You can see the confusion sometimes as (a quarterback tries) to get a check and the receivers try to get a tilt to see which one of us is coming or dropping into coverage,” Wiggins said.

To keep doing what they have been doing, the Tigers will have to find replacements for Smith and Peters this spring. Though that will be difficult to do, Wiggins and the rest of the secondary know they will be a target this year as teams will try to test them and see if they have adjusted to the changes that have been made.

“We like the pressure. Last year, they said we were the weak link or whatnot, but we liked that,” Wiggins said. “Now we have the target on our backs this year. The target is going to be on our backs anyway because we were the number one defense in the country last year. We like that target.

“We want to be the best,” he continued. “That’s coming to work every day. Making sure we study film. Do extra work and take that road to where we can be the best all over again.”