Deshaun Watson gets it

Deshaun Watson gets it

A lot of people marvel at Deshaun Watson’s ability not to be bothered by things.

After he broke his collarbone the week prior to the spring game last year, he seemed unfazed he would miss his first opportunity to play in front of Clemson fans. When Cole Stoudt was named the starter after the spring game, he sat back and waited his turn.

When he got his first opportunity to play, he wasn’t bothered it came in front of 90,000 Georgia fans at Sanford Stadium. He just went out on his first collegiate drive and completed a 29-yard pass to Mike Williams and threw a laser for 30 yards to Charone Peake for a touchdown.

A few weeks later against Florida State, when the offense was struggling, the true freshman was unfazed by the fact he was coming off the bench, on the road, playing the defending National Champions in front of 85,000 people who were all pulling against him.

What did he do?

He played flawless and nearly led the Tigers to an upset of top-ranked FSU.

In his first collegiate start the next weekend, he looked like a senior, not a freshman, throwing a school-record six touchdowns for 435 yards in a 50-35 victory over North Carolina.

“I just go out there and try not to take everything for granted,” Watson said.

Watson learned that lesson at an early age. At 15 years old, his mom told him she had cancer. It was a big blow and Deann eventually had surgery to remove her tongue. But Watson stood by his mother’s side every step of the way and, without knowing it, he built a mentality that separates him from most other people.

His mom’s cancer was an ordeal that put things in perspective for 6-foot-2, 205-pound quarterback. He understands there are more important things in life than just playing football and when adversity strikes there is nothing you can do, but fight back.

“It’s different, but I will not say it is too different because I have handled adversity before,” Watson said. “I just go out there and try not to take every day for granted. I just try and learn from it.”

That lesson helped Watson when he broke his right index finger while stiff-arming a Louisville tackler. His finger got stuck in the facemask. When he came up he was in obvious pain, but he stayed in and completed a screen pass for a first down before taking himself out.

Watson missed the next three games, but he returned in time for Clemson’s road trip to Atlanta, which was not far from his Gainesville, Ga., home. But despite working hard to get back in the lineup, his return was short lived.

While making a cut in what appeared to be a sure touchdown, Watson tore his ACL in his left knee. This is the kind of injury that would cripple the career of most athletes. But as Clemson head coach Dabo Swinney says, Watson isn’t most people. He is a “genetic freak.” 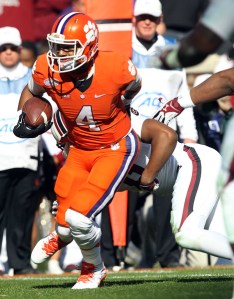 Two weeks after tearing his ACL at Georgia Tech Deshaun Watson was back in the lineup, wearing a knee brace and physically beating South Carolina with one leg.

A few weeks later, Watson and Swinney both agreed it was best he go ahead and have surgery on his knee. Instead of crying or pouting that he would be unable to play in the Russell Athletic Bowl against Oklahoma, Watson instead went to work.

Two weeks after surgery he was already walking around without crutches and two weeks after that he was jogging. By the time spring practices began in March, Watson was close to 80 percent.

“The player has to buy into the process and the things you do to get better and Deshaun is to the nth degree in anything and everything you ask him to do and his rehab is no different,” Swinney said. “That’s why he has responded so well. He really, really works so hard to get back.”

Watson is expected to get back to work full-time when the Tigers return for summer semester next month. In the spring, again, instead of pouting or sulking because he was going to miss the spring game, he spent every practice alongside Swinney so he can get a better understanding of the offense, the calls, the protections and all that it entails.

“I have never been around a guy so mature at this stage, as far as his understanding of the big picture,” Swinney said. “He is literally like talking to a coach. He just gets it at a level that no freshman I have been around ever has.

“Also, things he has dealt with off the field in his personal life with his mom and all those types of things, has really focused him and has given him this drive that sometimes young people do not all always have until maybe a little bit later in their careers. I think he has a real since of urgency.”

Watson is anxious to get back on the field and play for real and he is not worried about getting injured, either. He says he is going to play the game the same way he always has – he is going to be that same guy who hurdles over an NC State defender with reckless abandonment to make sure his team gets six points instead of settling for three.

“I have been doing this my whole life so it is all natural,” he said. “I will go back out there and do what I did before. Nothing has changed and nothing should change.”

And it won’t because Deshaun Watson isn’t made that way.

“He has an appreciation of the platform that he has and the opportunity that he has. He gets it,” Swinney said. “He understands what he represents and what comes with that. He knows there is going to be failure and success. He does a great job keeping all of that stuff at an even keel.”

Swinney has no interest in ACC politics

Bresee hungry to improve in Year 2

Clemson’s pass catchers are growing by leaps and bounds

After signing three wide receivers as part of the 2021 class in four-stars Beaux Collins, Dacari Collins and Troy Stellato, Clemson plans to take at least two more receivers in the 2022 class, possibly (…)

Swinney has no interest in ACC politics

Last year, the ACC teased football fans by adding Notre Dame into the conference due to the pandemic and doing away with divisions. However, both were temporary solutions to help the league and the Irish through (…)

CHARLOTTESVILLE, Va. — Clemson outfielder Morgan Johnson hit her second career home run on a three-run shot to centerfield with two outs in the top of the sixth to propel the Tigers to a 4-2 victory (…)

CHARLOTTESVILLE, Va. — Trailing by two runs heading into the fifth inning in Game 1 of Saturday’s doubleheader, the Clemson Softball team tallied five straight runs, including four in the top of the (…)

The Clemson seniors will have great memories of Senior Day as they defeated Pitt, 77-62, Saturday to take another step towards the NCAA Tournament. Check out some great pictures from the special day for the (…)

A five-star Clemson target in the class of 2022 has set his commitment date. Jefferson (Ga.) five-star athlete Malaki Starks announced via social media Saturday that he will announce his college decision on (…)

Saturday was Senior Day at Clemson’s Littlejohn Coliseum. However, the story of the afternoon was all about a sophomore. Guard Al-Amir Dawes came off the bench and scored a game-high 21 points and had five (…)

Bresee hungry to improve in Year 2

Clemson defensive lineman Bryan Bresee was named the ACC’s Defensive Rookie of the Year in 2020, when he also earned first-team all-conference honors and freshman All-American status after recording (…)

Clemson’s pass catchers are growing by leaps and bounds