Grady Jarrett has been running around so much this week as he prepares for Thursday’s NFL Draft that he nearly forgot Tuesday was his birthday.

“I have been so busy I just did not think about it,” the former Clemson defensive tackle said.

Jarrett eventually did get the opportunity to celebrate his 22nd birthday with some friends, but it was not until he fulfilled his obligations for the NFL Players Associations Rookie Debut Experience which he and 19 other draft hopefuls participated in on Tuesday in Chicago, where Thursday’s 2015 NFL Draft will take place.

The 20 former college players will also participate in another event tonight known as the NFLPA Rookie Debut Party.

“We are doing a couple events and a couple of signings for some memorabilia stuff and then there is a big dinner (tonight). It’s a pretty cool deal,” Jarrett said. “I got the opportunity to come up here so I just wanted to take it all in.”

Jarrett says the past four months has been a whirlwind of activity, which started with the Senior Bowl, then carried over to the NFL Scouting Combine, then to Clemson’s Pro Day and finally with all the traveling and workouts he has done for multiple franchises.

“It has been surreal,” he said. “When you are in college you get so excited about the combine, the Senior Bowl, the draft and guys talking about going off to pre-combine training. Just things like that. Just talking about it gets you excited when you are in school. For me to live it, go through all that and experience all that it is, it is very special.

“There are just a few people that get to go through that experience, even the ups and downs of it. It has been a once in a lifetime experience. Even though everything has not gone my way since the Oklahoma game, it still has been a good experience.”

Jarrett says his bad experiences have mostly centered on traveling, thanks to delayed flights, rental car issues and things of that nature.

“It’s just stuff that would frustrate you in a regular situation, but then I realize I get this opportunity to live out my dream of playing in the NFL so it has been real cool,” Jarrett said. 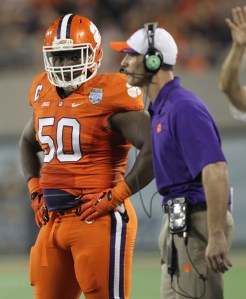 Grady Jarrett became one of the top defensive tackles in the ACC during his time at Clemson. A three-year starter, he tallied 83 tackles as a junior, including 11 tackles for loss and then this past year he was the unquestionable leader of a defense that ranked No. 1 nationally in 11 different categories, including total yards allowed.

Four years ago, no one would have imagined Jarrett, an undersized three-star defensive tackle out of Conyers, Ga., would be in a position to be drafted by an NFL team. But Jarrett just isn’t in a position to possibly be drafted, he will be drafted. The question is when and by whom.

Some so-called experts believe Jarrett will be selected by the end of the third round, while there is a few that think he could hear is name called in the second round. Jarrett has even been told to be ready on Thursday night, though he feels confident about going in the second round.

Regardless of when, it’s going to happen, and though Jarrett isn’t one of those “I told you so kind of guys,” he knows his selection will validate what kind of worker and football player he has always believed himself to be.

“I knew what I was capable of and I knew what my dream was. I knew what I wanted to do,” he said. “I was going to do everything in my power to accomplish it and that was getting to the NFL. I was doing this for myself and my family, working hard and believing in my abilities.

“Everybody wants to go to the NFL, but not everyone wants to do what it takes to get there. It started to all come together and in a couple of days we will know where I end up.”

Jarrett became one of the top defensive tackles in the ACC during his time at Clemson. A three-year starter, Jarrett tallied 83 tackles as a junior, including 11 tackles for loss and then this past year he was the unquestionable leader of a defense that ranked No. 1 nationally in 11 different categories, including total yards allowed.

The 6-foot-1, 304-pound defensive tackle totaled 73 tackles, to rank third on the team, and had 10 tackles for a loss in 2014. He ended his Clemson career with 3.5 tackles, a caused fumble and a quarterback pressure in the Tigers’ 40-6 victory over Oklahoma in the Russell Athletic Bowl.

After tonight’s NFLPA Rookie Debut Party, Jarrett plans to fly back to Atlanta in the morning and be home in time to watch the draft with family and friends back in Conyers.

“I’m just trying to enjoy the moment,” he said. “Let the chips fall where they may. I’m expecting to go somewhere in the first two rounds, but other than that I hope I go to a team that fits my playing style the most, but I will really just take it all in.

“I will probably be just as surprised as everybody else because you really never know when going through a draft. I will be happy with wherever I end up and I will make the most out of it.”

Things did not end too well for Clemson or the ACC in 2020. Granted, for the first time the Atlantic Coast Conference got two teams in the College Football Playoff in the same year, joining the SEC as the only (…)