Clemson begins a five-game home stand in Littlejohn Coliseum tonight (7 o’clock) against High Point. It is the first meeting between the two schools since the 2014-15 season when Clemson won, 62-59.

The Tigers (2-2) have faced one of the nation’s toughest schedules so far. Clemson’s strength of schedule is seventh according to Tuesday’s RPI.

Clemson is 3-0 all time in the series with High Point. The two programs met for the first time in 2002 in Greensboro, N.C. Two of the three games have been decided by single digits.

With a thin bench early in the season, Clemson has seen six players account for 758 out of a possible 800 minutes. Tiger point guard Shelton Mitchell is listed day to day after missing the first four games of the season due to a knee injury suffered November 8.

Clemson is led in scoring by senior Jaron Blossomgame, who is coming off a season-high 22 points against Oklahoma. He scored 18 in the second half as the Tigers trimmed an 18-point deficit to two over the final minutes.

Sidy Djitte is playing the best basketball of his career. He produced his third double-double against the Sooners, with 14 points and a career-high 14 rebounds. He also added two blocks and two steals.

Marcquise Reed has gotten off to a strong start as a Tiger, averaging 11.3 points per game. He has made 16 of his first 17 free throw attempts as well.

After losing the rebound margin in each of its first three contests, Clemson was +14 on the boards against Oklahoma, thanks in large part to 23 offensive rebounds, most ever by a Brad Brownell coached Tiger team. 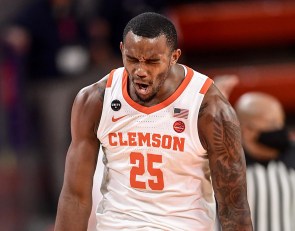 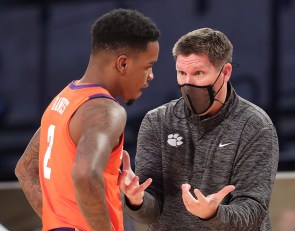