Tigers, Buckeyes know each other well

Tigers, Buckeyes know each other well

Second-ranked Clemson will face a familiar foe when it plays No. 3 Ohio State in the College Football Playoff Semifinal at the Fiesta Bowl on New Year’s Eve in Glendale, Ariz.

It was just four seasons ago when the Tigers knocked off the Buckeyes in the 2014 Orange Bowl down in Miami. Of course that was back in the old BCS system, while this year’s game will have national championship implications on the outcome.

Clemson beat the Buckeyes, 40-35, that night handing Urban Meyer just his second loss at Ohio State at the time. Meyer says he is very familiar with Clemson and head coach Dabo Swinney.

“I actually know a lot about Clemson because we recruit against them,” the Ohio State coach said on ESPN’s selection show special on Sunday. “We run similar type programs and I have a lot of respect for Dabo (Swinney). He is a very good friend. We see each other every year.

“I know the quarterback. We tried to recruit him as well. They are a very, very talented group. I understand their offensive skill. I have not studied them yet, but they are as good as there is in college football. We have to get ready and that preparation starts today.”

As for Swinney, he says he has not sat down and watched a complete Ohio State game just yet, but he has seen bits and pieces here and there.

“They’re the Buckeyes. They’re a great program and have been,” he said. “You look at what Urban Meyer has done since he got to Ohio State, it’s incredible, the run that they’ve had. Obviously, we played them a couple years ago, and that was an incredibly hard-fought game, and I don’t expect anything different this time around.”

Clemson earned its way into the College Football Playoff with a 42-35 victory over Virginia Tech in the ACC Championship Game on Saturday. It was the Tigers second straight conference title.

This will not only be Clemson’s second straight trip to the College Football Playoff, but their second straight year to Arizona as well. The Tigers, who will be making their appearance in the Fiesta Bowl, played in Glendale last year when they lost to Alabama in the national championship game.

“We’re excited to be in the playoff. It’s good to know where we’re going, and now we know who we’re playing, and now it’s about turning the page and starting the process of getting ready for this one,” Swinney said. “But we do have some experience of being out in Arizona last year, so we look forward to going back out there and hopefully getting a little better result.”

Clemson and Ohio State have played just two times before and both came in bowl games. Steve Fuller led the Tigers to a 17-15 victory over the Buckeye’s in the 1978 Gator Bowl, Woody Hayes last game as head coach at Ohio State.

Then of course there is Clemson’s win over the Buckeyes in the 2014 Orange Bowl. 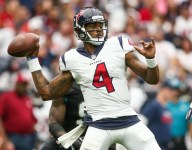