To Venables, Jackson is in a league all by himself

To Venables, Jackson is in a league all by himself

With North Carolina leading Louisville by a point nearly halfway through the second quarter last Saturday in Chapel Hill, N.C., the Tar Heels decided to bring a corner blitz off the edge.

Instead, Jackson brushed the cornerback off and delivered a perfectly thrown pass to Jaylen Smith for a 75-yard touchdown pass.

“Those are the kinds of things a special player can do,” Clemson defensive coordinator Brent Venables said on Tuesday. “It is one thing to take what is there, but he can make something out of nothing all day.”

Venables and No. 2 Clemson’s nationally ranked defense have already experienced what Jackson can do once. The reigning Heisman Trophy winner recorded 457 total yards and three touchdowns on the Tigers’ in last year’s classic in Death Valley.

“It is kind of crazy because he does not have the biggest frame or the biggest build, but that guy is like wiry strong,” Clemson defensive tackle Christian Wilkins said. “He breaks a lot of tackles. He is really fast. He can stop on a dime and make cuts. He can do a lot of different things. You see it live and then watch it on film, you are like, ‘Wow!’

“It is impressive he can do all of that stuff. Hopefully, we can put together a good plan and be ready for him. It should be a good matchup. We are really excited for the challenge.”

The matchup will come Saturday at No. 14 Louisville. Clemson’s defense is considered one of the best in the country and through two games it has played like it, yielding just 120 and 117 total yards to Kent State and Auburn.

The Tigers (2-0) had 11 sacks against Auburn last Saturday. But they have not seen anyone from Kent State or Auburn that comes even close to what they will see out of Jackson at Papa John’s Stadium on Saturday night.

“He is really unique,” Venables said. “He does not have the size of Vince Young. But the things that Vince Young was able to do … improvise, throw it and run it. Sometimes the worst thing you could do against Vince Young was cover everybody and obviously Lamar has that in him as well.”

Then the way Louisville head coach Bobby Petrino tries to scheme around his superstar quarterback makes it even more difficult to slow Jackson down.

“I think the schemes they have around Lamar are really exceptional,” Venables said. “That’s no big surprise. It is an excellent system they have tailored it. It is not just the spread QB-run game stuff. There are ton of things. There is a pro-style to it as well. That is very multiple and that makes it hard to defend.”

North Carolina tried to defend it last week, but Jackson went off for 525 total yards and five touchdowns – three throwing and two rushing. The Cardinals finished the game with 705 yards overall. Jackson ran for 132 of those yards and threw for another 393.

“He has a tremendous, natural, wiry strength that even when you got the free hitter it is like a 50-50 ball for us on defense,” Venables said.

Venables admits prepping for Jackson is like getting ready to play Georgia Tech, who runs a triple-option style offense, which is unique in its own way.

“It’s probably the same, except … and I wouldn’t say except, but with Georgia Tech if they are getting five yards a clip, that is a real problem,” the Clemson coach said. “You are in trouble. With these guys, they can hit one for 50 (yards) like that. Whether he is running it or he is throwing it. If you make one mistake, they can flip the field.”

Though he is enjoyable to watch, seeing Jackson on tape and the things he can do makes Venables stomach turn.

“It is fun, but the more you see of it, the sicker you get,” Venables said. “I’ll be honest … because it’s like, all of the plays he makes even when he is not there. That’s a good call and then you are looking for the result and it’s a plus-nine (yard gain).” 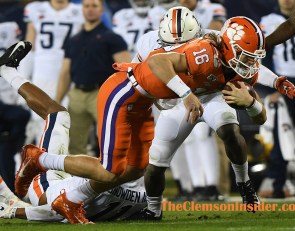