When Jeff Scott decided years ago he wanted to be a coach in college football, his father, Brad Scott, who serves as an assistant athletic director for player development on Dabo Swinney’s staff, tried to talk him out of it.

“He was worried about me having to pick up and move every three or four years,” Clemson’s co-offensive coordinator said.

The only time Jeff Scott has worried about moving since he came to Clemson as a graduate assistant coach in 2008 was when he and his wife moved across town. Other than that, Clemson is really the only thing he knows.

Scott did not even finish as a graduate assistant at Clemson before Dabo Swinney, as the interim head coach at the time, promoted him to wide receivers coach. When Swinney was given the job permanently, he kept Scott on his staff and the rest is history.

“One of the best advice I have been given, and it was actually from Coach Swinney, and that is to be great where your feet are and bloom where you have been planted,” Scott said.

Taking that advice, while trusting in his faith, is why Scott is still on board at Clemson despite being in the running for a couple of the head coaching vacancies that were opened at non-power five schools. Scott did not indicate if he actually interviewed for any of the jobs his name was rumored to be associated with.

“You see a lot of people in the coaching community where they see their eyes outside looking for that next opportunity, trying to make things happen,” Scott said. “I have learned from Coach. He was just here coaching as hard as he could to be the best wide receivers coach he could be and then one day he got the opportunity to be the head coach.

“So when that day comes, I will know when that is, but I really enjoy what I am doing right now.”

The Tigers (12-1) are coming off their third straight ACC Championship and will play Alabama for a third straight year in the College Football Playoff on New Year’s Day in the Sugar Bowl. If they can get past ‘Bama, the Tigers could be playing for its third straight national championship.

“To be honest I feel like we are just getting started,” Scott said. “We always talk about that the best is yet to come, and there is a lot of us that are still young (coaches) so I’m looking forward to several more good years here at Clemson.

“I really feel like, because of the recruiting, that we are only going to get better each year so that is an exciting thought and feeling.”

Scott says he has never been in a hurry to take off and leave Clemson. If that opportunity comes one day for him to be a head coach, then he will know it, but right now he is excited about the future at Clemson.

“I’m looking at what we are doing right now, but I am thinking about the younger group that is going to be coming here the next two or three years and that really gets me excited,” he said. “If that happens, I hope I can continue to come to Clemson to work every day.”

And Scott will know when that day will come.

“First of all, I am a man of faith,” the wide receivers coach said. “I have been able to look my entire life, not just my career, and just being able to see how the Lord has a plan. He’ll speak and He will let me know when it is the right time.

“The best thing is I am at the right place and around a lot of great people and learning. I enjoy coming to work every day. It is an unbelievable culture that we have here at Clemson. When you are coaching at your alma mater, especially at a place like Clemson and for a man like Coach Swinney, you are not in a hurry to leave. That is really where I am as a coach.

“Every day I am just trying to continue to learn from all the coaches around me, from Coach Swinney, from our players and taking all of this in. If it is in the Lord’s plan for me to be a head coach one day, then that is going to happen on its own.”

Scott says he does not take what he has at Clemson for granted. He feels very blessed he has received the opportunity to coach at his alma mater.

“To be able to be at your alma mater for 10-plus years, it has been a blessing,” he said. “To have a young daughter here, there is no greater place in the world to raise a family then right here at Clemson, especially in an environment that Coach Swinney has created here at Clemson.” 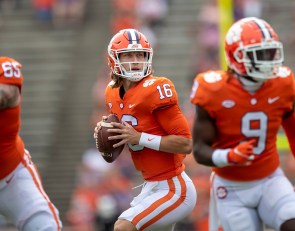