We are walking through history right now

We are walking through history right now

Wednesday's Thoughts: Is this the best sports year in Clemson history?

What were you doing in April of 1990? Whatever you were doing, I bet you were not having as much fun as Clemson athletics.

In 1990, Clemson was celebrating one of its most successful years in terms of its two largest revenue making sports.

The football team finished up a top-15 season in 1989 with a 27-7 win over West Virginia in the Gator Bowl. It finished the year ranked No. 12 in the both the Associated Press and USA TODAY’s Coaches Polls.

On the basketball court, the Tigers won a school-record 26 games, won the ACC regular season championship and advanced to the Sweet 16 of the NCAA Tournament. Clemson finished the year ranked 17th by the AP and 13th by USA TODAY.

Even though the NCAA later vacated the Tigers’ two tournament wins, the 1989-’90 sports year was considered Clemson’s most successful year in the two big sports until this year.

Since Brad Brownell became Clemson’s head basketball coach in the spring of 2010, he and head football coach Dabo Swinney have been close friends. They travel together during Clemson’s Prowl and Growl Tour and ACC events. Their families and coaching staffs are close as they hang out together in many social circles.

But the one thing they have not shared is professional success at the same time. While Swinney was building a national champion on the gridiron, Brownell was trying to make basketball important again at Clemson.

After taking his first team to the NCAA Tournament, Brownell had to rebuild the program from scratch. He seemed to be there in his fourth season as a K.J. McDaniels led team just missed the NCAAs and went to the Final Four of the NIT. That team won 23 games that year and 10 in the ACC.

The pieces seemed to be in place for a NCAA Tournament run the next season. However, McDaniels turned pro that following spring, something Brownell and the staff were not expecting, and without their star player, the Tigers did not have enough to keep the momentum going and slipped to 16 wins the following year. 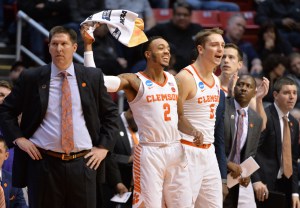 Brownell later admitted they were not prepared for McDaniels to leave a year early, and so he adjusted the way he recruited to make sure it did not happen again. In the following years, Clemson’s program spent 20 months without a home as Littlejohn Coliseum was gutted and built back up.

During that time the basketball team shared Jervey Gym with the women’s basketball team and the volleyball team. They shared a tiny locker room with minimal space and played their home games 45 minutes away in Greenville.

Brownell also changed his philosophy in recruiting and started adding transfers who had at least two or three years of eligibility remaining. First he brought in Avry Holmes and a year later added Shelton Mitchell, Marcquise Reed and Elijah Thomas to the roster. He later brought in David Skara and graduate student Mark Donnal.

Brownell’s change in his recruiting philosophy and the addition of a brand new Littlejohn Coliseum, which has all the bells and whistle to allow Clemson to recruit at a high level, set up this season’s run to the Sweet 16.

Not only did Brownell develop Mitchell, Reed and Thomas into All-ACC caliber players, but he and his coaches still recruited and developed other players such as Donte Grantham and Gabe DeVoe and made them superstars. He also brought in Aamir Simms, who as a freshman flashed his potential while starting the majority of the second half of the season after Grantham’s year ended prematurely.

On Tuesday, Clemson’s basketball team finished ranked No. 15 in the final USA TODAY Coaches Poll after winning 25 games, finishing tied for third in the ACC and getting to the Sweet 16 Round of the NCAA Tournament. It marked the program’s highest ranking in a final coaches poll since the 1996-’97 team finished the year No. 8.

Clemson is the only school to finish in top 15 of USA Today coaches poll in football and men's basketball in 2017-18.

Mark that with the success of the basketball team, and Clemson is the only team in the country this season to finish the year ranked in the top 15 of the coaches poll in both football and basketball.

You can make the argument this is the best sports year ever for the two programs at the same time. Don’t forget, in 1990, Clemson’s marriage with longtime head football coach Danny Ford ended ugly after the 1989 season and Ford was forced to step down as head football coach.

The football players threatened to boycott the 1990 football season and let’s just say then new head coach Ken Hatfield was not welcomed with open arms.

So we are walking through history right now. This is the best sports year in Clemson history to this point, and who knows, the baseball team might make it even better.