Bates says Jefferies will be 'a great player'

Bates says Jefferies will be 'a great player'

Freshman DT 'on track' to play this season

The true freshman defensive tackle enrolled at Clemson in January and went through spring practice, wasting little time impressing Bates with his ability and will to work and learn.

“He’s showing a lot of flashes,” Bates told The Clemson Insider at Dabo Swinney’s media golf outing this week. “I know that he’s going to be able to be a great player here. He works his butt off, and he attacks the day. He just fits right in. He’s never died off of that work ethic, which is what got him here. He’s developing, getting stronger, working in that weight room and learning his playbook.

Clemson’s depth at defensive tackle, both in the short and long term, took a hit this offseason with the transfers of Jabril Robinson, Sterling Johnson and five-star true freshman Josh Belk. The depth will get even thinner after the upcoming season, as the Tigers will lose seniors Christian Wilkins and Albert Huggins, and presumably junior Dexter Lawrence if he leaves early for the NFL as expected.

So, Jefferies has an opportunity to earn early playing time in 2018. Wilkins and Lawrence figure to see the lion’s share of snaps as Clemson’s starting defensive tackles, with Huggins in position to be the primary backup. That leaves Jefferies, redshirt sophomore Nyles Pinckney and redshirt freshman Jordan Williams to compete for reserve action behind the aforementioned trio.

Clemson’s staff has shown that it is not afraid to play young guys, as long as they are ready to play, and Bates says it will be up to Jefferies to prove he is ready as a first-year freshman.

“Players kind of decide that at Clemson, where if they’re ready to go and they’ve developed and they know what to do… That’s one of the things, and he’s on track to do that,” Bates said. “He knows what to do. He’s learning more and more of the playbook every day because we do a lot of different things as far as being multiple, and he’s just diving in.” 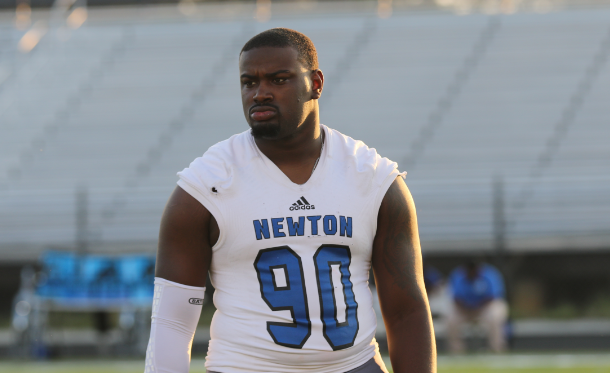 The Covington, Ga., native showcased his athleticism throughout his career at Newton High School. He saw time at tight end as a senior, catching seven passes for 70 yards and a touchdown, and played basketball and ran track as a junior.

Regardless of how much he plays this season, Jefferies will have a chance to make more of an impact in 2019, when Clemson is likely to return just two other scholarship defensive tackles in Pinckney and Williams.

Bates said he is looking for Jefferies to continue to develop and take coaching — from not only the coaching staff, but also the veteran defensive tackles — as he prepares for a larger role next season.

“He’s done a great job of taking coaching, and just continue to do that,” Bates said. “Everything is set for you when you come here at Clemson. He’s getting a chance to learn under Dexter and Christian and Albert, all those guys right now. You’ve just got to take that and bottle it up, remember how they done you when you were a freshman — you didn’t have a choice to put in the work or not; you’re going to put in the work. So, he’s just got to continue to do that.”

The defensive tackles that Clemson signs in the 2019 recruiting class will be key in providing depth for the Tigers next year. Clemson currently has a couple of commitments from River Rouge (Mich.) three-star Ruke Orhorhoro and Winder (Ga.) Barrow three-star Logan Cash, both of whom are listed as defensive ends by the major recruiting services but may slide inside at the next level.

Bates and the Tigers have an eye on adding further talent at defensive tackle in order to ensure a smooth transition at the position come 2019.