A season after making it to the Alabama Class 7A state semifinals, Central High School in Phenix City, Ala., is off to a 3-0 start in 2018. One of the leaders of the team is Class of 2019 Clemson safety commitment Ray Thornton.

Thornton (6-2, 200) has performed well early in the season as he’s posted 13 tackles and a pass breakup. Central has dominated its opposition through three games, allowing only 28 points while scoring 139.

“Everything has been going good so far. I’m doing my job not only for me, but for my team also,” Thornton said. “My person goal is at least five interceptions and a kick return TD.”

Thornton earned an offer from Clemson on June 21 after competing at the Dabo Swinney Camp and committed to the Tigers one day later over offers from Auburn, Florida, Mississippi State, Ole Miss, Georgia Tech and others.

One of the top-rated safety prospects in the state of Alabama, Thornton has visited Clemson twice in the three months since he’s been committed. He attended the All In Cookout in July and returned for the season-opening win against Furman on Sept. 1 at Death Valley.

“I loved every second of it,” Thornton said of the latest visit. “Talking with the coaches, players and fans was exciting.”

Thornton was able to spend time and continue strengthening his relationship with Clemson’s coaching staff during the visit.

What did he hear from the coaches while on campus?

“Glad I’m here, come back and they can’t wait to get me up there,” Thornton said.

Thornton was accompanied on the visit by one of his teammates at Central, Class of 2020 wide receiver and Clemson target E.J. Williams.

“He enjoyed it,” Thornton said. “He had a great time.”

Williams received an offer from Clemson in July and also has offers from Auburn, Georgia, LSU, Florida, Mississippi State and others.

Thornton said he is doing his best to be a mentor to Williams during the recruiting process, having gone through it himself.

“I’m just playing a family role, guiding him through the process,” Thornton said.

Both Thornton and Williams are former teammates of Clemson freshman wide receiver Justyn Ross, a former Central standout who caught the first touchdown pass of his college career against Furman.

“He’s done his job so far,” Thornton said of Ross. “Keep working and he’ll be right where he’s supposed to be. He’s going to be a great productive receiver for their offense.”

Thorton tallied 57 tackles and two interceptions for Central as a junior last season. He is on track to enroll early at Clemson in January. 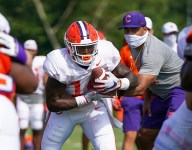 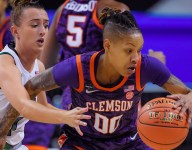 GREENSBORO, N.C. — With their third straight triumph over Notre Dame, Clemson came from behind and won a thriller in its ACC Tournament opener at Greensboro Coliseum on Thursday. The (…)