Rayburn stays in ear of Putnam during official visit weekend

Rayburn stays in ear of Putnam during official visit weekend

Among the Clemson commitments that made their official visit to Tigertown this past weekend was four-star offensive lineman Hunter Rayburn of Pensacola, Fla.

“I had a great time,” Rayburn told The Clemson Insider. “Up until now, obviously all I’ve taken is unofficials, and the official was just a whole ‘nother level because you get to spend that two-day block of time with the coaches and with all the other commits and just get to see what goes on behind the scenes and just have a good time.”

Rayburn and the other official visitors were taken out to eat at Halls Chophouse on Friday night. Naturally, the steak dinner served as one of the best parts of the visit for the 6-foot-4, 320-pound offensive lineman.

“That was incredible,” Rayburn said with a chuckle.

“Sunday morning, we got to talk one-on-one with Coach Caldwell. That was probably my favorite part of the trip, was talking to Coach Caldwell,” Rayburn said. “It was just talking about their schemes, what they run, the kind of offense they run, how they block it, that kind of stuff.”

Along with Rayburn and about a dozen other commits, Clemson played host to a couple of uncommitted prospects for their official visit last weekend.

One of those was Tampa (Fla.) Plant four-star offensive lineman Will Putnam, whom Rayburn was around a lot and had a chance to bond with throughout the weekend.

“I hung around Will Putnam pretty much since he got there, because he got up Saturday,” Rayburn said. “We all got up Friday, because he had a game Friday night. But I hung around him, and he seemed to enjoy it. I like talking to him. He’s really easy to talk to. He’s a really good kid, so that was pretty fun.”

Rayburn made his recruiting pitch for Clemson to Putnam, his fellow Floridian, but didn’t put any pressure on him.

“Obviously talked about how great of a place it is, how great the people are there,” Rayburn said. “But more than that, just tried to talk to him, normal conversation and make him feel comfortable, that kind of stuff.”

Did Putnam talk about where the Tigers stand in his recruitment?

Rayburn plans to continue staying in Putnam’s ear about Clemson until he makes his college decision.

Rayburn committed to Clemson in June, choosing to play for the Tigers over offers from Texas A&M, Florida, Florida State, Auburn, Stanford, Miami, Tennessee, Alabama and others. He will enroll early at Clemson in January and can’t wait to start his career as a Tiger.

“I’m just doing everything I can to get in the best shape I can, hit the weight room hard, that kind of stuff,” Rayburn said. “Just finish up the school year strong, that way when I enroll I’m starting off on a good foot.” 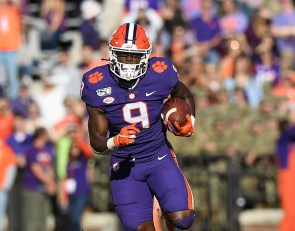 Fifth-year senior Cornell Powell has patiently waited for his time to shine at Clemson and has done just that throughout this season, including during Saturday’s game against Pittsburgh on Senior Day at (…)

Third-ranked Clemson returned to action on Saturday after three weeks without a game and rolled Pitt 52-27 in its final home game at Death Valley this season. In its last outing at Notre Dame the Tigers were (…)

At first No. 3 Clemson came out mad. Then it got a little complacent and then it finished strong, as it rolled to a 52-17 victory over Pittsburgh Saturday at Death Valley. In possibly his final home game, (…)

Clemson scored a record 31 first-quarter points thanks to two Trevor Lawrence touchdown passes and three interceptions by the defense. Lawrence completed 17-of-25 passes for 302 yards as the Tigers took a (…)

Third-ranked Clemson showed up to play after a three-week hiatus and rolled into the halftime break with a 38-10 lead over Pittsburgh. The Tigers regained a couple of key pieces in the heart of the defense in (…)

Some wondered if third-ranked Clemson would be rusty after not playing in 21 days. The Tigers were not rusty. Instead they were mad. After Florida State suddenly postponed last week’s game in Tallahassee, (…)

Third-ranked Clemson took it to Pittsburgh in the first quarter of Saturday’s game at Death Valley. The Tigers went up 31-0 on a 1-yard touchdown rush by Lyn-J Dixon with five seconds left in the opening (…)

Third-ranked Clemson continued to pile it on Pitt as it took a 24-0 lead on a two-yard run by Travis Etienne with 4:55 to play in the first quarter. The drive covered 35 yards in five plays and 2:14. The (…)

Third-ranked Clemson extended its lead to 17-0 over Pittsburgh on Saturday at Death Valley thanks to a flea flicker midway through the first quarter. Trevor Lawrence handed the ball off to Travis Etienne, (…)

Clemson jumped out to an early 7-0 lead over Pitt, on a five yard touchdown pass from Trevor Lawrence to E.J. Williams with 11:56 to play in the first quarter. The drive covered 16 yards in three plays (…)

Countdown to Kickoff: Finally, Tigers are getting back on the field

Rencher ready for another moment in his Clemson journey

TCI Game Day and Predictions: Pitt at No. 3 Clemson