No. 20 Clemson had issues swinging the bats in game one Friday but more than solved that problem in game two. It finished the day with a whopping 17 runs on 20 hits including six doubles and a home run.

The Tigers took game two of the series from third-ranked North Carolina with a 17-3 victory in the second game of a double header Saturday in Doug Kingsmore Stadium. They put crooked numbers on the score board in each of the first five innings.

Grayson Byrd and Sam Hall led the way for Clemson finishing the day for-for-five and four-for-six from the plate respectively. Hall finished with four RBIs and two doubles and Byrd with four RBIs and a double. Bryar Hawkins also had an incredible day batting four-for-five with three RBIs and a home run.
Clemson head coach Monte Lee was beyond proud of how his team responded after struggling to hit in the game one as well as the last few games.

“After last weekend it was tough but these guys have to be able to move on. We played well against Furman and scuffled offensively in game one,” Lee said. “We had three straight games where we didn’t swing the bat well and it was really good to see our offense breakout in game two and hopefully we can carry that on,” he said. 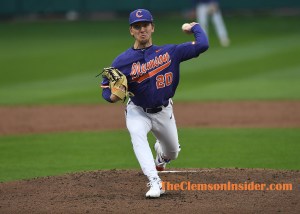 Matt Clark was the winning pitcher for the Tigers and had a solid day on the mound thanks to the confidence he gained from a powerful offensive performance. He pitched six innings allowing four hits, two runs, struck out five and only walked one to earn the win.

Carolina (12-3, 0-2 ACC) got started first with a run in the top of the first as Dylan Harris scored on a throwing error by Byrd to take an early 1-0 lead.

Clemson (11-3, 2-0 ACC) took the lead in the bottom half of the first, and never looked back, with a pair of run-scoring singles from Grayson Byrd and David Sharpe. Sam Hall led off with a first pitch double to left center to get things rolling for the Tigers. After Davidson flew out to shallow left Byrd pushed a single just past the glove of the second baseman that allowed Hall to score from second and tie the game at one. After another out, David Sharpe pushed a single to left that scored Byrd and gave the Tigers a 2-1 lead after one.

Clemson extended its lead on a two out rally in the bottom of the second inning that plated four runs on four hits. Jordan Greene got things started for the Tigers with a leadoff double before reaching third on a wild pitch with no outs. Kier Meredith proceeded to ground out to second and Sam Hall struck out which gave Byrd the chance to deliver with two outs. He fought of pitches in a 1-2 count before roping a two-RBI single into right field, giving Clemson a 4-1 lead. 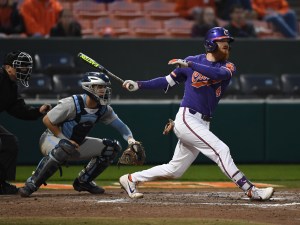 Wilkie doubled down the right field line to score Byrd from first in the next at bat to score Byrd and put the Tigers up 5-1. And, the scoring continued with an RBI single by Bryar Hawkins that scored Wilkie and extended the lead to 6-1.

The Tar Heels responded with a run on a ground out by Michael Busch that scored Dylan Enwiller and cut the score to 6-2 Clemson.

It continued to add to its lead in the third inning with a pair of runs on three hits. Kier Meredith got on base with one out after being hit by a pitch and Sam Hall singled to move Meredith over to third base. Logan Davidson grounded out to second, scoring Meredith bumping the score up to 7-2. Grayson Byrd hit another RBI single with two outs to make it 8-2 after three.

The Tigers added another run in the bottom of the eighth when Teodosio reached on a fielders choice, scoring Hawkins and making the lead 17-3.

The hitting was contagious on Saturday and Lee hopes that trend continues as the season progresses in conference play.

“It all started in the first inning and we got off to a hot start. Sam Hall smacks the ball in the gap and next thing you know,” Lee said. “It’s crazy how contagious offense is and we got on a roll and didn’t slow down the whole game,” he said.

Clemson goes for the sweep Sunday at 1 p.m. in Doug Kingsmore Stadium.

Leave it to Dabo Swinney to put the SEC in its place. It is fitting considering Swinney’s Clemson Tigers have won more games against SEC competition over the last decade than any other non-SEC team in the (…)

Third-ranked Clemson routed Pitt last Saturday and looked crisp after a sluggish stint in the middle of the year due in large part to injuries. Defensively, the Tigers held the Panthers to 246 yards of (…)

Elliott feels for recruits, but says there is a ‘silver lining’ of NCAA dead period

The year 2020 has been strange in a lot of different ways because of the coronavirus pandemic, including from a recruiting standpoint in the sense that college programs have not been allowed to play host to (…)

In year’s past, preparing for Virginia Tech’s defense was a difficult challenge. Bud Foster was one of the top defensive coordinators in the game and he always did his best to confuse a (…)

Meertens shines as Tigers down Mercer to move to 4-0

Davis back to 100-percent at crucial time for Clemson

Etienne: Perfect example why college football is so important to NFL