One of the top prospects that traveled to Clemson for the program’s junior day this past weekend was Southlake (Texas) Carroll four-star defensive back R.J. Mickens.

The nation’s No. 1-ranked safety arrived at Clemson on Friday night and spent most of Saturday on campus.

“I got to spend some time with the coaches, sit in some meetings and just see how Coach (Dabo Swinney) coaches and all that,” Mickens told The Clemson Insider. “I got to learn some good stuff, see how he interacts with the players and how Coach V (Brent Venables) interacts with the defense. I got to do all that and then got to hang out around the facilities. I was with Coach (Mickey) Conn all day and did the photoshoot.”

“The highlight would definitely be just sitting down with the safeties coach, Coach Conn,” Mickens said. “Just talking and getting all my questions answered, chatting it up.”

Mickens, the son of former Texas A&M All-American and NFL defensive back Ray Mickens, made the trip from the Lone Star State to Tigertown with his mother. It marked her second time seeing Clemson.

“She actually likes it a lot,” Mickens said. “She likes all the things Coach (Swinney) teaches and the principles, and she likes the campus.” 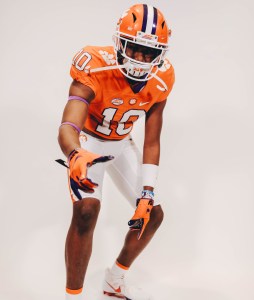 The Tigers have played host to Mickens on several occasions since extending an offer to him in January 2018. He also made his way to Clemson for the game vs. Louisville last November and stopped by campus last June as well.

On Saturday, Mickens had a chance to check out the Tigers up close during one of the team’s spring practices.

“The team looked great,” he said. “They’ve got some crazy receivers. Trevor Lawrence – obviously, everyone saw the natty — he was definitely one of the dominant players. The D-line lost some guys, but they’ve got some new guys stepping up.”

While on campus, Mickens met with Swinney and spoke with Clemson’s head coach for close to 30 minutes.

Mickens was also able to chop it up with another one of Clemson’s priority targets that was on campus for the junior day — five-star wide receiver Julian Fleming.

“My good friend, Julian Fleming, I’ve been talking to him and seeing what he thinks, seeing what I think, just chatting it up,” Mickens said. “I saw him up there on the visit and got to talk.”

Along with Clemson, Mickens has amassed offers from Florida, Michigan, Alabama, Georgia, LSU, Notre Dame, Ohio State, Stanford and many other major programs.

He plans to release his favorites soon, and Clemson looks like a lock to make the list.

“I’m about to drop my top schools list,” he said. “I’m still visiting some of the schools that I’m more interested in, and Clemson, that visit definitely helped. I definitely like Clemson. They’re definitely one of my top schools, and I want to get up there again of course. I’ve got some friends who are really interested as well.”

Mickens is ranked as the No. 1 safety and No. 42 overall prospect in the 2020 class by both Rivals and the 247Sports Composite. As a junior last season, he notched 57 total tackles and a couple of interceptions on defense while compiling 973 all-purpose yards and scoring a handful of touchdowns on offense.