Pryor on Clemson: ‘It feels like I’m already on the team’

Pryor on Clemson: ‘It feels like I’m already on the team’

Cedartown (Ga.) running back Kobe Pryor visited Clemson for the program’s junior day in early March and left campus with an offer from the defending national champs.

“It means a lot, off of the season that they just came off of,” Pryor told The Clemson Insider recently. “I’m really excited to grab that offer.”

While on campus, Pryor (6-0, 200) spoke in length with his primary recruiter for the Tigers, co-offensive coordinator and running backs coach Tony Elliott.

Elliott checked in on Pryor during the spring evaluation period, and the two have been building a relationship.

“It’s grown a lot over time,” Pryor said. “He came down to watch me work out, so it was a good time.

“I like how he talks to me and how he treats me. It feels like I’m already on the team.”

Pryor also made a visit to Auburn recently and plans to visit Georgia this weekend. Clemson could soon play host to him again as well.

“I’ve got spring break next week, so I’m going to try to make it down there then,” he said.

Pryor said he is considering waiting until February to make his decision.

The in-state Bulldogs might hold the cards in his recruitment, but Clemson is in the mix.

“They’ve got a good shot,” he said. “I think it’s a good program. They’ve come a long way, and I just like what they’re doing.” 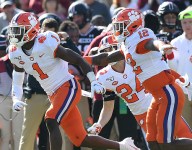 Clemson has picked up a major commitment from one of the nation’s top quarterbacks in the 2022 class. Austin (Texas) Westlake four-star Cade Klubnik announced his commitment to the Tigers via social media (…) 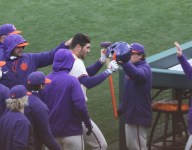 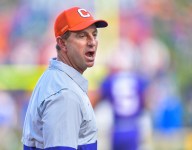 National writer high on Clemson heading into next season

National college football writer releases his projected AP preseason Top 10 for next season. The Tigers are No. 2 in Phil Steele’s ranking behind only defending national champion Alabama. (…) 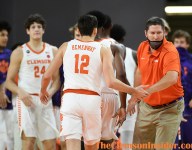 March Madness is going to be even more maddening than normal. It is already starting. Due to Virginia Tech canceling Wednesday’s home game against Louisville because of contact tracing within the program, (…)

In the first 2021 NCAA Division I Men’s Spring Rankings, United Soccer Coaches announced Tuesday that it has ranked the Clemson men’s soccer program No. 1. Clemson garnered 16 of the 26 first-place votes in the (…)

Clemson is well represented on this list of the top high school quarterbacks over the last two decades. Trevor Lawrence, Deshaun Watson and DJ Uiagalelei all made the top 10 of this ranking by (…) 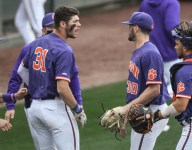 Grice shows off his power

Clemson got on the board to take the lead in the third inning. Caden Grice smashed a solo home run off the roof in right center.  It was Grice’s first home run as a Tiger, but many more will come. After (…)