Clark comes through in the clutch

With its NCAA hopes on the line, Clemson was in desperate need of a good pitching performance Thursday as it opened up an important three-game series against Wake Forest.

Matt Clark responded with one of his best performances of the year. The sophomore went 6 2/3 innings, while allowing three runs, none earned, off four hits as the Tigers got a much needed 4-3 victory over the Demon Deacons at Doug Kingsmore Stadium in Clemson.

“I have to give a lot of credit to Matt Clark. He was absolutely amazing tonight,” Clemson head coach Monte Lee said.

The win allowed the Tigers to take a one-game lead on Wake Forest in the ACC Standings and more importantly gives them an edge to earn an NCAA Tournament bid. Clemson came into Thursday’s game as one of the last teams in the field of 64, according to DI Baseball, while the Demon Deacons were one of the last teams out.

Clark’s day did not start off too well on Thursday. The lefty allowed Wake to load the bases in the top of the first inning as he allowed two walks and a double. However, he got Michael Ludowig to ground out to first base to retire the side and keep the Deacons off the scoreboard.

Counting the Ludowig out, the sophomore retired 14 straight batters, including seven strikeouts during that stretch. Wake did not get another runner on base until the sixth inning.

“That was a huge sequence there as we ended up getting out of that inning without giving up a run,” Lee said.

The lefty finally ran into trouble again in the top of the sixth inning when a double by Bobby Seymour scored Patrick Frick, who reached on an error. The Demon Deacons scored two more unearned runs in the seventh inning on another Seymour hit.

“I started off kind of shakey, but after that I got my confidence up and definitely settled in,” Clark said.

Carson Spiers got the save as he went the final 2 1/3 innings to hold Clark’s lead. 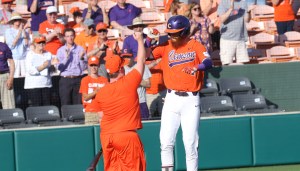 Clemson (32-22, 14-14 ACC) took an early lead in the bottom of the first inning when first baseman Grayson Byrd drilled an 0-1 pitch off Wake starter Collin Peluse and took it to straightaway centerfield. The home run was his 13th of the season and his team leading 53rd RBI.

The Tigers led 1-0 after one inning.

Byrd has hit eight home runs in the last 11 games for Clemson.

“Byrd might be the hottest hitter in the country right now,” Lee said.

Clemson extend its lead on Wake Forest (29-24, 13-15 ACC) in the second inning when Bryar Hawkins took Colin Peluse’s first pitch with one out in the bottom of the second inning and sent it to deep left centerfield. The bomb gave the Tigers a 2-0 lead at the time.

Clemson doubled its lead in the bottom of the fifth inning on after Logan Davidson brought home Bryce Teodosio with a sac fly to centerfield. That gave the Tigers a 3-0 lead. Then catcher Kyle Wilkie followed by laying down a well-executed bunt down the first base side, which allowed Sam Hall to score on the squeeze play.

Hall had singled earlier in the inning and Teodosio led off the inning with a walk.

Clemson and Wake will play Game 2 of the series on Friday at 6 p.m.

TCI Game Day and Predictions: No. 3 Clemson at Virginia Tech

It is Game Day in Blacksburg where the Tigers look to continue the road to Miami and another national championship.  No. 3 Clemson battles Virginia Tech with a trip to the ACC Championship on the line. (…)

Leave it to Dabo Swinney to put the SEC in its place. It is fitting considering Swinney’s Clemson Tigers have won more games against SEC competition over the last decade than any other non-SEC team in the (…)

Third-ranked Clemson routed Pitt last Saturday and looked crisp after a sluggish stint in the middle of the year due in large part to injuries. Defensively, the Tigers held the Panthers to 246 yards of (…)

Elliott feels for recruits, but says there is a ‘silver lining’ of NCAA dead period

The year 2020 has been strange in a lot of different ways because of the coronavirus pandemic, including from a recruiting standpoint in the sense that college programs have not been allowed to play host to (…)

Meertens shines as Tigers down Mercer to move to 4-0

Davis back to 100-percent at crucial time for Clemson

Etienne: Perfect example why college football is so important to NFL