Clemson heads into the summer without a tight end commitment, though it is looking to take one in the 2020 class.

In our Looking Ahead feature, The Clemson Insider takes a look at the top names on the board in this cycle as well as some tight ends we’re tracking in the 2021 class:

Clemson’s longstanding priority target at the position for 2020 has been Marietta (Ga.) five-star Arik Gilbert. He received an offer from Clemson last spring, and was most recently on campus for the Tigers’ elite junior day in January after attending the South Carolina game in November. 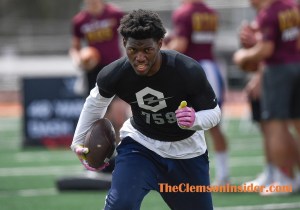 Gilbert, the nation’s top-ranked athlete, is considered a heavy Georgia lean. He made his latest visit to Tennessee this past weekend, while he has also been to Alabama, Oklahoma, Texas A&M and Georgia this spring. Clemson continues to recruit Gilbert, who wants to take official visits before making his decision. He told TCI earlier this spring that he hoped to commit sometime around the start of his senior season.

Among the tight ends Clemson is evaluating for a potential offer is Miami (Fla.) Gulliver Prep’s Diego LaMonica. Clemson tight ends coach Danny Pearman watched LaMonica practice at his school recently, and LaMonica is slated to participate in a full session of the Dabo Swinney Camp next month (June 4-6). He previously visited Clemson for the spring game in April after attending the Tigers’ junior day in March.

The younger Fauria told TCI that he has been in contact with the Tigers through social media, and called Clemson one of his “dream schools.” He plays wide receiver for his high school team but projects to be a tight end at the college level.

One tight end the Tigers have been pursuing is four-star Braiden McGregor of Port Huron (Mich.) Northern. Following an official visit to Notre Dame in April and Florida in May, McGregor announced over the weekend that he will announce his decision on Friday. Michigan or Notre Dame appear to be the likeliest choices.

Clemson had also been communicating with Tampa (Fla.) Jesuit three-star tight end Jonathan Odom, who committed to Florida on Saturday — following in the footsteps of his father, Jason, who was an All-American offensive lineman for the Gators.

The Tigers were in the top five for Morristown (N.J.) Delbarton four-star tight end Lukas Ungar before he committed to Stanford in March.

Another tight end the Tigers have offered and got a visit from last summer is Las Vegas (Nev.) Desert Pines five-star Darnell Washington. 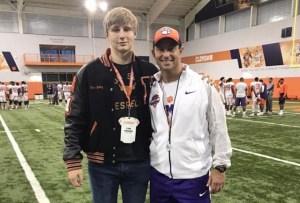 Cane Berrong with Dabo Swinney on visit to Clemson

Looking ahead to the 2021 class, Clemson has a chance to be a top contender for Hartwell (Ga.) Hart County’s Cane Berrong, the No. 1 tight end in his class according to 247Sports. He visited Clemson in early April and plans to work out at the Swinney Camp in June.

Other tight ends to know for 2021 include but aren’t limited to Jacksonville (Fla.) Episcopal’s Nick Elksnis and Savannah (Tenn.) Hardin County’s Hudson Wolfe.