Clemson offer ‘a big deal’ for WR teammate of Uiagalelei

Clemson offer ‘a big deal’ for WR teammate of Uiagalelei

“It was after the camp wrap-up in Death Valley,” Collins, the No. 11 receiver in the 2021 class per 247Sports, told The Clemson Insider.

“They were playing a video, and Coach Scott and Dabo walked up to me and brought up that the national championship game will be out here in L.A. in a couple years (2023). He was saying he really wants me to be a part of a team that will go to the national championship when it’s out here, and he was just saying how they really like me as a player and that they would offer me a scholarship.”

Collins was smiling ear to ear when he found out about the big-time offer. 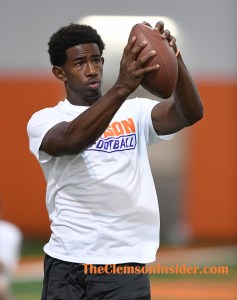 “I couldn’t stop smiling at that point,” he said. “It’s a big deal to me, letting me know that I still have a lot of work to do but I’m one of the top (receivers) in my class.”

Not only does Collins now have an offer from the defending champs, but he also has the chance to reunite with his high school teammate and battery mate — Clemson quarterback commit DJ Uiagalelei — at the next level.

“That would be big to go out there with DJ,” Collins said. “Just knowing that I would have a brother out there already is a pretty big deal for me.”

Collins made the trip to Clemson with a group of prospects from California that included Uiagalelei. The Cali contingent was on campus from Monday to Thursday.

“I loved it. It was a great experience going out there to South Carolina for the first time and meeting all the coaches and players that were there,” Collins said.

“What stood out to me was meeting Coach Dabo and seeing how much of a genuine coach he is, and just really sitting down and having a conversation with him.”

Collins worked out with Scott at the Swinney Football Camp on Tuesday and Wednesday and enjoyed getting to know Clemson’s receivers coach.

“He said he really loved me as a player and even more as a person off the field,” Collins said of Scott, “and he just really hopes I make the decision to go there and follow the legacy of receivers that have been there.”

Collins says he is still a ways away from making his commitment decision. His long list of college offers includes Alabama, LSU, Michigan, Notre Dame, Ohio State and Southern Cal among many others.