Country’s No. 1 center loves ‘everything’ about Clemson

Country’s No. 1 center loves ‘everything’ about Clemson

After landing a commitment from five-star defensive lineman Bryan Bresee in the current recruiting cycle, Clemson is positioning itself to be a contender for Bresee’s talented teammate at Damascus (Md.) High School – Ryan Linthicum, the No. 1 ranked offensive center in the nation for the 2021 class.

Linthicum visited Clemson with Bresee for the spring game in April, then returned to campus last week for the Dabo Swinney Football Camp.

“I loved the Clemson camp,” Linthicum told The Clemson Insider. “It went well.” 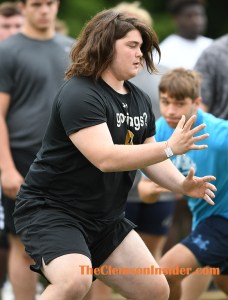 Asked what he liked the most about it, Linthicum was quick to point to Tigers offensive line coach Robbie Caldwell.

“Just how good of a coach Coach Caldwell is,” he said. “And I love how he coaches. It would be my dream to play there.”

Caldwell let Linthicum know that he is firmly on Clemson’s radar for the class of 2021.

“To keep doing what I’m doing,” Linthicum said of what he heard from Caldwell at the camp. “One of the top interior O-linemen on the board and it’s looking good in the future for me.”

Linthicum has already collected 15 scholarship offers as a rising junior, with schools such as Ohio State, Michigan, Maryland, Virginia Tech, LSU, Pitt and North Carolina making up his list.

Linthicum told TCI that an offer from the Tigers, and the chance to play with Bresee again, “would mean the world” to him.

“I just love the atmosphere there and everything about it,” he said of Clemson.

Linthicum said he will return to Clemson for a game this upcoming season. He is also planning visits to Michigan, Ohio State and Virginia Tech.