Newly offered 4-star TE can see himself at Clemson

Newly offered 4-star TE can see himself at Clemson

Brentwood (Tenn.) Ravenwood tight end Jake Briningstool participated in the full second session of the Dabo Swinney Camp from June 11-13 and impressed the Clemson staff enough to earn an offer from the Tigers.

It was the first reported Clemson offer to a tight end in the class of 2021.

“It was awesome,” Briningstool told TCI. “It was great to feel wanted by such a great program.” 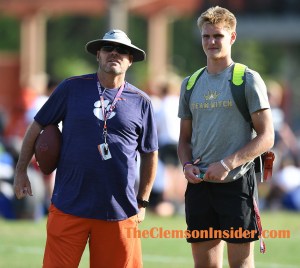 Briningstool (6-6, 215), the No. 7 tight end nationally in the next cycle per 247Sports, was in Swinney’s offense when he was given the big news.

“Coach Swinney, Coach (Danny) Pearman, Coach (Lemanski) Hall and my whole family met in Coach Swinney’s office and he offered me during our meeting,” Briningstool said.

What was Swinney’s message to the top-ranked rising junior tight end in the state of Tennessee?

“He was just explaining to me about what it means to be a Clemson player and what they look for in recruits such as grades and attitude, etc.,” Briningstool said. “After that he started to explain to me how I’d fit into their offense and how they’d use me if I played there.”

Briningstool told us that he isn’t sure when he will make his commitment decision, but that he can certainly see Clemson being a potential college fit.

“Clemson is definitely a school I could see myself being at,” he said.

Briningstool plans to return to campus for the Texas A&M game at Death Valley on Sept. 7. He is scheduled to visit Miami this weekend.