Keithian Alexander, also known as the “Big Bear,” has always towered over his peers.

“I’ve always been a big guy, like bigger than everyone around me in the school,” Alexander told The Clemson Insider during an exclusive in-home interview on Saturday.

Alexander’s size is one of the reasons he’s a heavily recruited prospect in the class of 2022. The 6-foot-4, 333-pound rising sophomore from Skyline High School (Dallas, Texas) has already amassed 20 scholarship offers.

Clemson is among the schools that have expressed early interest in Alexander, and the Big Bear visited Tigertown for the first time in early June during the Dabo Swinney Camp.

“At Clemson I was able to work out and be coached under the best,” Alexander said. “(Defensive tackles coach) Todd Bates was able to be a mentor and was able to speak with me afterward briefly. So, being there at Clemson, knowing they produce the best of the best at my position, it was just eye-opening and I had an amazing time.”

Alexander, who also visited Georgia and Alabama as part of a Southeastern school tour, possesses rare athleticism for his size that has awed even the most prominent college football coaches. 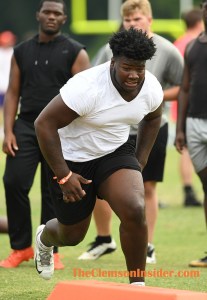 “As a D-tackle – it literally came out of Dabo Swinney’s mouth, and coach Todd Bates – I had the quickest get-off as a freshman,” Alexander said. “Even the head coach at Georgia (Kirby Smart) was like we’ve never seen a big guy move as well as you can move. So, I can have an advantage over everyone.”

Before the recruiting process began for Alexander, the Lone Star State native grew up a fan of the University of Texas. Now, he holds an offer from the Longhorns along with schools such as Texas A&M, TCU, Alabama, Georgia, Florida, LSU and Ohio State to name some.

Alexander and his mentor, Skyline assistant coach and recruiting coordinator Tony Jones, started preparing for the recruiting process before it even got started.

“Before any of this blew out, we automatically knew this was going to happen,” Alexander said. “So every day, we mentally prepare for it, we physically prepare for it – we’re just ready for it to come our way.”

Alexander’s recruitment is still in the early stages, though he has a good idea of what to expect moving forward thanks to Jones and his brother, a 2020 linebacker who is committed to Ole Miss.

“I have a small support system – me, of course my coach and my brother, Jaqwondis Burns, the Ole Miss commit,” Alexander said. “So, I’m able to watch him go along in the process and kind of pick up on it and be able to maneuver.”

Don’t expect a decision to come any time soon from Alexander, who wants to take a lot more visits and let the process play out.

Whenever the time comes for Alexander to render his commitment, a few factors will play a big role in determining his college choice.

“The best education, who provides the best mentor, who’s able to look after me once I’m away from home and able to guide and lead me, make sure I’m the best male version I can be,” he said.

Alexander said that distance won’t be a factor, which bodes well for Clemson. There’s a long way to go, but expect the Tigers to be a top contender for his services when it’s all said and done.