Keithian “Big Bear” Alexander, a 6-foot-4, 333-pound rising sophomore from Dallas, is one of the country’s top prospects in the class of 2022.

Tony Jones — an assistant coach and recruiting coordinator at Dallas-Skyline High School who serves as a mentor to Alexander — compares the future five-star defensive tackle to a former Clemson and current Atlanta Falcons standout.

“He reminds me a lot of Grady Jarrett,” Jones told The Clemson Insider during an exclusive in-home interview this weekend. “He’s explosive, he has really big hands, and he’s violent with his hands. He can play every position interior, whether it’s a true nose or he’s a two-tech or he can even go to a three-tech. His upside and things that he can do with his skillset, his size… I see him like a Grady Jarrett. He has some Dexter Lawrence (in him). He’s very explosive off the ball.” 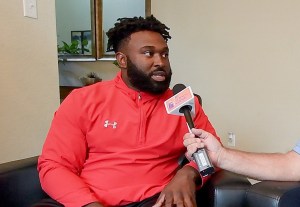 Jones recently accompanied Alexander on an unofficial visit to Clemson in early June and came away impressed.

“I saw a program that had top-of-the-line facilities,” Jones said. “When you’re going about these things, you want to make sure that not only are your guys going to be OK once they get to campus, but how they’re going to take care of their bodies and how they’re going to adapt to the college life and things like that. So at Clemson, what I saw was a close group, close-knit family, family atmosphere. They had some top-of-the-line facilities, and we’ve been to quite a few places here within the last year.”

Jones is doing his best to guide Alexander through the recruiting process, knowing that Alexander – who already holds 20 scholarship offers – will be a highly sought-after national prospect in the 2022 class.

With three years of high school still ahead of him, Alexander isn’t in any rush to commit to a school.

“We’re just going to be patient and enjoy it,” Jones said. “He’s still very young, so we’re quite a ways away from him actually having to make a decision. We’re going to see of course more schools and go back to some of these places for a second and a third time, and once he feels like he’s comfortable and this is the fit and this is what he wants to do, then he’s going to pull the trigger. It’ll be any time that he has that feeling.

“But anything can happen in this game. He could get injured, or anything could happen. Making sure that he secures his education is going to be the most important part. So, it could happen anywhere between now and his junior year.”

Not only will the program that lands Alexander’s commitment be getting a major force on the interior defensive line, but they will also be getting a winner off the field and in the locker room.